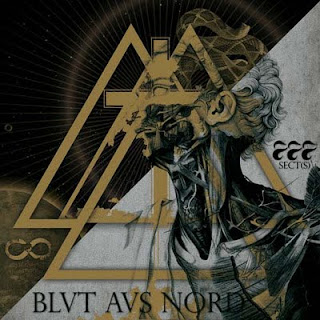 Really understanding the music of France’s Blut Aus Nord can take some time. If I say that 777- Sect(s) is a difficult album to get through in one sitting, it is not a complaint. Those familiar with the band will immediately recognize their trademark approach to black metal—a harnessing of dissonant chaos into some sort of listenable order—and surely be pleased. If after the first few tracks the uninitiated are bored or frightened, I recommend coming back to it fresh before passing judgment.

Though Blut Aus Nord is pretty much legendary, I was not as impressed with the rerelease of The Mystical Beast of Rebellion as I had expected to be based on all the noise made about it (it was my first Blut Aus Nord experience); but I didn’t dislike it either. There were memorable moments, particularly where things got demonic and where noiscapes and industrial/ambient element were used. Fortunately all of that is still present in this newest release and presented with a higher level of maturity and craft.

The album is comprised of six tracks all entitled “Epitome” (parts one through six) adding to the feeling that it is intended to be taken as a cohesive whole. Part one is mostly a speedy whirlwind of hellish melodies, as should be expected of the band, but it breaks down into a pleasantly unexpected outro consisting of groovy drums and ominous keyboards. Part two is quite different, far more melancholic and melodic than “demonic clown” sounding, and definitely a highlight on the album. It is in some ways similar to some of the more accessible elements found in “Chapter 7” of “The Fall” on the rerelease of Mystical Beast....

“Epitome 3” blends the vibes of parts one and two while “Epitome 4” kicks up the moodiness and groovy rhythms in a mighty composition of nearly twelve minutes in length. The final tracks follow suit and fit the vibe of the album perfectly. I won’t say more because I’m sure people are going to want to listen to it for themselves. But it’s strong to the end; no disappointment.

The great thing about this album is that it commanded my attention for much longer and for much better reasons than most of my previous experiences with the Blut Aus Nord. They are just so capable of composing using those grating, jarring and uncomfortable melodies they like in such a way that is entirely listenable. Wherever things seem to be utter nonsense, there is a creepy melody carried by the voice or other instrument floating on top of the churning mass, guiding the song and keeping a semblance of order.

Just as with my last Blut Aus Nord review, I am reminded once again of Doré’s engravings for Dante’s Il Purgatorio ed il Paradiso or Milton’s Paradise Lost when listening to 777 – Sect(s). Other times I just see the winding brimstone tunnels of a very orthodox Hell. Not a bad accomplishment in a scene over-saturated with that kind of imagery.

-Bryan A. Wysopal
Posted by The Inarguable at 2:37 PM