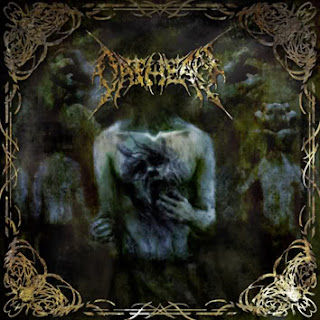 What the fuck happened here? I have long followed Oathean for some time now and for those of who, who do not know what this band. Oathean is a Korean Black Metal band with some Gothenburg riffs and melodic parts here and there. But anyway With their last release and this self titled release this is one of those album that goes to show you this is what happens when a band has run out of ideas and MUST resort to jumping on the CHEESE WANGON (aka the train of producing shitty riffs and cheesy fucking music).

Unlike their first 3 album which had killer riffs, music, ideas, originality ect ect ect. With this release there is none of that. With the intro track (Those Who Curse) it is a 33 second intro that is a cheesy//corn synth intro which is really how all of the synth is on this album it is like something cradle of filth would shit out good fucking god.
Pretty much all of the riffs and guitar work on this album are tremolo picking that has been done a million times over oh oh and the other riffs are basically shitty half assed Norwegian Black Metal riffs basically.

After some how getting passed the 2nd track (Oathean) the following track (Two Faces) HAS A FUCKING BREAK DOWN !!!!! What the fuck is that shit ? I guess these guys have been gaining influence by listening to Abigail Williams or some shit. Well I like I said this is a album that was produced in which the ideas have stopped flowing so I guess They could not think of any Black Metal ideas so something as easy and shitty as core must be a little easier to think of ideas in terms of playing.

Well I have pretty much summed up this album Core, breakdowns or no they are not even Breakdowns I am going to call them Blackdowns that is a perfect name for them, horribly ripped off Ghost Reveries riffs with some Deathcore chromatic riffs, boring ass drums, pussy cry baby sorrowful synths, cheap knock off Norwegian black metal riffs, well at least the vocalist still sings in the same style still. What a piece of shit.