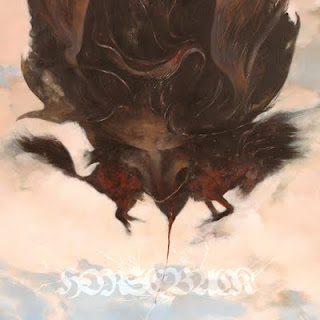 With the sheer amount of releases under musician Jenks Miller's project Horseback, it is rather difficult to 1) purchase these normally super-limited, obscure releases and 2) predict just what these albums have in store for the listener. The 2-CD compilation The Gorgon Tongue, released just a few weeks ago on Relapse Records, is comprised of two previous, limited albums, namely the long-sold-out Impale Golden Horn as well as the limited-to-100-copies Brave Mysteries tape Forbidden Planet, released later last year. Each half of the double album reveals yet another face to the enigmatic Horseback, yielding results that one might not expect, and yet can logically trace, from their more popular psychedelic metal sleeper hit, "The Invisible Mountain."

Disc one holds Impale Golden Horn, lauded as one of aQuarius Records's top releases of 2007. This beautiful, expansive drone album condenses the hustle-bustle chaos of life and the beauty of existence into 48 and a half minutes of ringing, harmonic glory. The calming, meditative, organic nature of this disc expands into pure sound; guitars mix with organs, drums and low drones, creating a wonderful, ethereal, unforgettable atmosphere. This sonic expansion makes way for the final track, Blood Fountain, the sort of "resolution" to the chaotic, unresolved nature of the album, or maybe even a delayed climax to the ever-growing crescendo comprised of the first three tracks. Blood Fountain, as one can see in the wonderful video presented by Stereogum, is a reserved, quiet "slowcore" song, akin to bands like Red House Painters or Low, but with a much more post-rocky, peal-worship sort of edge, maybe like some of Aaron Snow's projects like Landing or Surface of Eceyon (check those bands out, you won't regret it). Impale Golden Horn is a strong representation of Horseback's more reserved, "pretty" side, which acts as a stark contrast to its second disc counterpart.

Disc two, as stated earlier, is the recently-released and super-limited Forbidden Planet, a very different companion piece to the pretty Impale Golden Horn. Forbidden Planet showcases Miller's love for the harsher, blackened side of music, featuring heavily-distorted, super-layered guitar tracks, groaning bass and the distant "thud" of what might be a bass drum. Miller's trademark, effects-heavy rasp makes its triumphant return on this release as well, and yet, while this has the black metal aesthetic and execution, this is something entirely new and unique to Horseback. Having just as much in common with the "Night of the Electric Insects" movement of composer George Crumb's Black Angels suite as it does black metal, we see Forbidden Planet heralding, or rather resurrecting a much more modern, avant-garde world of sonic experiments. It's creepy, it's harsh, and yet it's undeniably cleansing; like you're scraping the insides of your ears with a pumice stone, removing any excess wax and skin that might prevent you from hearing the slightest nuance hidden within the hiss. If you can, you should hunt down a copy of this one on tape for the ultra-harsh experience, but I doubt anyone will surrender a copy just yet.

So, while this double album doesn't really present any new material by Horseback, it is definitely wonderful to see a large metal label like Relapse taking on such unorthodox music as Jenks Miller's extensive back-catalog. I sure hope some kid in a Dying Fetus shirt buys this one due to Denis Forkas Kostromitin's wonderful artwork and completely changes his or her outlook on music. Jenks Miller, through his solo projects, Horseback, and his alternative-country band Mount Moriah, is part of a new wave of young musicians who constantly challenge given musical laws, even set by their own music, and The Gorgon Tongue is a fine example of Miller's unwillingness to conform. Buy this. Buy it now.