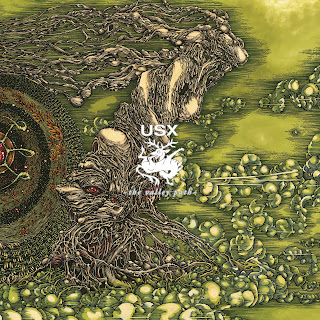 Does your dad still have that velvet, tie-dye Grateful Dead poster in a box somewhere in the attic? Maybe a small square of shag carpet you can borrow? ...How about some magic mushrooms? Alright, good, because you're going to need at least these three items for your journey ahead on the intensely psychedelic The Valley Path. Formerly known as U.S. Christmas ("Oh yeah, those guys!"), USX takes their reverb-drenched, kraut-rock inspired to the next level with this one, expanding their horizons ever further with this 39-minute epic. "Oh man, not a super-long concept tune," you complain, but, let's face it; every psychedelic rock band needs a long song, maybe to be a part of some elite permafried squad or something. Instead of a super drawn-out snoozefest like one would expect from a near-40-minute tune, USX presents a rather interesting and enjoyable take on the "trip-out epic."

When I first saw USX live, back when they opened for Neurosis in late 2007, I was completely amazed by their complex instrumentation; three guitars, theremin, noise generators (a la Hawkwind), and keyboards galore, everything worked together in perfect harmony...and everything makes its triumphant return on this album and then some. Drawing upon their already successful cowboy folk-tinged psychedelia (to which I affectionately call "space pioneer folk rock"), USX adds wonderfully lush strings to the equation, adding exponentially to their already rather epic, crescendo-based sound. The movements within this massive album flow together rather nicely, leaving every idea resolved and completed (which is normally a complaint I have for longer tunes, so good job, USX!).

The only complaint I could see people having about this is the fact that the song is so long. Being raised on bands like Camel and Nektar, I've never really had a problem with long songs, but one must remember the ever-dwindling attention span of today's generation; do you think they can handle a 39-minute-long song? However awesome The Valley Path is, I can definitely see precocious youngsters growing weary of its massive length and skipping to whatever else might be on their iPods. Of course, if you are a) perfectly fine with longer tunes or b) going on some spiritual journey and need a companion piece, then you should by all means check out USX's The Valley Path. This epic, yet calming, mammoth of an album is another stepping stone on USX's own path towards becoming one of the "greats." Immense yet not overwhelmingly so, I know I'll be spinning this bad boy for a while.