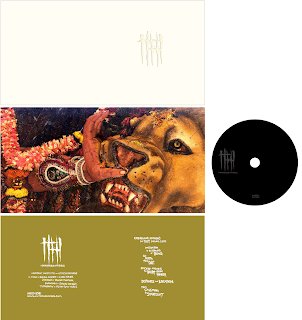 According to their website, ITHI is a New York City based duo including Luke Krnkr and Joshua Convey. Other than a sample of a demo-version of a song on the album, that's all the pertinent information on the website. No band photos, no history, no distractions. For a noise-oriented group like ITHI, this primal, neo-minimal approach to marketing themselves is rather indicative of the "new avant-garde" movement seen over the past few years. Older composers and groups will present an onslaught of information; how many bands they've been in, a super long-winded history, some reviews...you know, stuff only press nerds like me enjoy, but ITHI just gives a few names and a location (one you might recognize if you're already into this sort of stuff...and one you might be surprised to see upon lots of research).

"The Persistence of Meaning" is a rather intriguing and challenging listen; it's harsh, but not in that "I need to cover my ears, who is playing Merzbow and The Rita records at the same time" sort of way, rather something more lulling and familiar...there are electronic beats but don't expect any sort of "power noise" or "IDM" fodder here, more something that makes your head bob naturally with the music (without even noticing it), or maybe the music is reacting to your movements (?). This album is something primal and instinctual; the animal within. It's unsettling, layered noise and ambiance is undeniably creepy and eerie, yet it's almost as if I've known this album; like they've taken my biorhythms and found their droning, noisy, anti-musical equivalents.

Oh yeah, and it's also mastered by James Plotkin and the layout was done by none other than Kevin Gan Yuen. Have I piqued your interest yet?

This release, along with the Horseback/Locrian and GOG/William Fowler Collins collaborations I reviewed will be available in exactly one week at Utech Records Music Festival (URMF), being held at the Cactus Club in Milwaukee, Wisconsin. From what I understand, cover should be about $20, which is infinitely cheap for the sheer amount of awesome music you'd see.

-Jon
Posted by The Inarguable at 5:44 PM