Obsequiae - "Suspended in the Brume of Eos" (2011) [Bindrune Recordings] 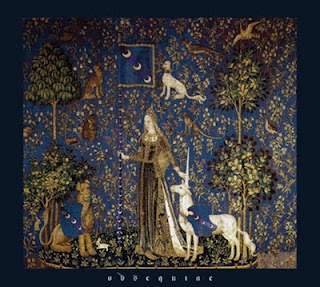 To put it lightly, Minnesota musician Tanner Anderson "knows what's up." After releasing Celestiial's opus Where Life Springs Eternal, one of my favorite albums of last year, one would normally expect a few years of silence before hearing anything from the Anderson camp, but that simply is not the case. Anderson's "new" band, Obsequiae, a continuation of his older Autumnal Winds project (a nostalgic favorite), proves that he is a brute force in the underground US metal scene; able to crank out beyond-quality albums year after year.

Obsequiae's debut full-length, the incredibly impressive Suspended in the Brume of Eos explores an area of folk-tinged black metal that most people either a) try and fail miserably or b) are too afraid to even attempt for fear of being called cheesy. Yes, whenever black metallers miscegeneate with medieval-styled music, it normally spells for something that isn't terribly unlike a distorted Castlevania soundtrack, yet Obsequiae's spidery, complex guitar harmonies create something a bit more genuine. A music nerd myself, at times I recognize early organum (early polyphony) practices within the guitar interplay, creating interesting, ancient polyphonic textures. This reverence for pre-Renaissance music practices is definitely something into which more artists should look, rather than just sort of "throwing in some harpsichords" and calling it a day. There is more to writing periodic music than just mimicry; one needs to understand its practices, which Obsequiae performs flawlessly.

What really makes this album for me is the powerful, punchy bass. Most complex, folky metal artists like Obsequiae tend to forego memorable bass tracks for even more layers of guitar when the bass itself adds loads to the aggressive nature of the music. It's that extra, rumbling low-end "kick in the gut" that sets Obsequiae apart from other, seemingly forgettable "medieval metal" bands.


Triumphant and obscure, Obsequiae's texturally complex, almost-technical approach to medieval-tinged black metal is, in this reviewer's opinion, highly enjoyable and unique. The band's uncanny ability to hold my attention throughout the 41-minute, twelve song album when I normally shy away from more European-styled folk metal is definite proof of this Minnesota duo's strong, uncompromising songwriting abilities. Suspended in the Brume of Eos's pristine atmosphere will be released on Bindrune Recordings later this month.