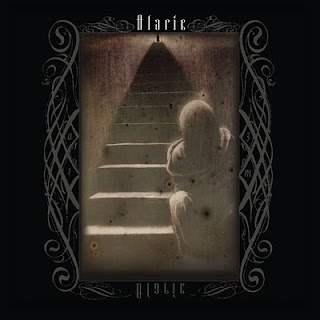 This year has definitely proven itself to be the year of post-punk's true revival. Why true? Well, instead of radio-friendly groups like Interpol flooding the music scene, we have been bombarded with quality, hard-hitting releases by Anatomy of Habit, Atriarch, Population, Puerto Rico Flowers, Hateful Abandon, and many others, all of which are hell-bent on ruining your day and making you lay in your bed, watching the ceiling until the sun goes down. Alaric, named for the barbarian warlord who brought about the fall of the Roman empire, is one post-punk revival group whose record debut I have been impatiently waiting for at least the past few months, and completely within reason; with current and former members of Noothgrush, Cross Stitched Eyes, Enemies, Dead & Gone, and more, it is hard to expect anything less than phenomenal from this stellar lineup...

...and stellar it is. Equal parts Black Sabbath, Killing Joke, and early The Cure, Alaric's extraordinarily impressive self-titled debut is reminiscent of old skateboarding VHS tapes that you would watch with your (significantly cooler) older brother, who would sometimes let you wear his patch-laden denim vest if you were lucky enough. Alaric is a 47-minute-long conglomerate of doomed, metallic post-punk/death rock -- absolutely jam packed with gloomy melodies, driving percussion and anthemic, fist-raising choruses that will leave every hair on the back of your neck standing at attention. This is hypnotic melancholy, drowned in whiskey and lashing out at anything that approaches it. Filled with anger, despair, and a semblance of strength, lost within depressed, atmospheric riffing, this is everything I'd expect from this group of musicians, and it is obvious that they have played off of each other's strengths.

As brilliant and powerful as this album is, it definitely raises some concerns for post-punk's future. With the way that "new" music styles and trends move throughout the West coast of the United States, I am definitely worried that post-punk will become the next "Cascadian black metal." I can see it now: a giant group of musicians will abandon their black metal projects for black button-down shirts and synthesizers, while cranky jerks like me bitch and moan on forums, saying "I remember when Alaric and Atriarch were doing that in 2011. Know your roots." It all seems so vaguely similar to my Weakling vs. Cascadian black metal rants of old... History is doomed to repeat itself over and over again, so know now that in 5 years' time everyone will owe everything to what these few bands are doing now. Buy the fantastic album that will change everything. Wear black. The 80s are back.