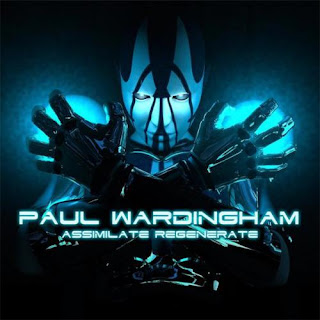 As a guitarist and shredder my self I have been waiting all my life for a album like this ! Being a big fan of Scar Symmetry´s Holographic Universe (as well as their other works) this is the first offering of that albums Melodic Death Metal or aka Future Metal style in shred form as some have deemed it.
It very clear that Paul´s style of guitar playing is HIGHLY influenced by Scar Symmetry and above all Per Nilsson. Assimilate Regenerate brings out and builds upon Scar Symmetry´s Holographic Universe style and with the space synths, and Swedish style Melodic Death Metal as well as some Djent riffs in there. But if you are looking for Death Metal vocals and clean vocals you will not find that stuff here because this is a all instrumental album.

Paul´s skills are out of this world when a guitar is in his hands. His guitar tones for both rhythm and leads are crystal clean the drums are very tight as well the spacey synths parts all played in areas of the song where they belong. The over all production of the album is really high quality. ONE OF MY FAVORTIE things about this album is that Paul is not playing in the Rusty Cool uber super duper shred play 3000 notes per second which is a growing trend among most guitar players these days when it comes to modern shred. There is an equal balance between the brutality and melodic solos which all together on this album just has amazing song writing.

Through super chunky Scar Symmetry, and Sybreed riffs, melodic Per Nilsson solos, and spacey solos this album has been the high light of 2011 for me. Like I said I have been waiting for an album like this to come out I can not stop listening to it, It is a 60 minute Future Metal space trip after only listening to this album 10 times and listening to my personal favorite track Ghost in the Machine it is refreshing to guitar some one play the guitar with such energy and passion, also the album has no big label meddling in the music so it is safe to say Paul did all the music him self with no help from greedy money hungry labels.

I am sure Paul is on the write road on his musical career you watch this man is going to be going places .