2011 has been such a fantastic year for extreme music. No matter your preference, there has no doubt been something about which one can get excited this year. Disappointments have been few and far between, with a few obvious exceptions. Death metal especially has taken a big hit. Morbid Angel hit an all time low, Deicide struggled to reclaim past glory and, even though Disma's new album is great, it just doesn't say much about the current state of death metal when it's the absolute best thing the genre has going. With that being said, it's been a stellar year for black and doom metal, each with an abundance of worthwhile listens and several real gems. These are the albums to which I found myself listening the most, along with a quick word about each release. 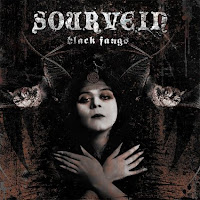 10. Sourvein - "Black Fangs" [Southern Lord Records]
Growing up in South Louisiana, it's hard not to have a soft spot for some dirty sludge. I looked forward to Crowbar's newest to fulfill this craving but, unfortunately, I was left underwhelmed. Thankfully, longtime favorites Sourvein stepped up with a killer slab of heavy goodness which gave me exactly what I needed.

9. Disma - "Towards the Megalith" [Profound Lore Records]
While certainly not the most original album of the year, the huge sound and well-executed old school death metal made Towards the Megalith a pretty damn enjoyable listen. As a huge fan of old Incantation, I must admit I was expecting a bit much at first. It was only after coming to the conclusion that I really shouldn't be making such a comparison that I began to enjoy this more and more.

8. Endstille - "Infektion 1813" [Season of Mist Records]
Bombastic and absolutely brutal German black metal which conjures up an ungodly amount of sonic aggression the likes of which hasn't been done to this high a caliber in quite some time. The word "relentless" gets thrown around quite a bit but the term has rarely been more fittingly ascribed than with this album. 7. Loss - "Despond" [Profound Lore Records]
After thoroughly enjoying the Life Without Hope, Death Without Reason demo, I was excited to finally hear Loss's debut album. I wasn't let down, and, at times, I found myself getting goosebumps where the depressing walls of sound reached their peak and the bleak atmosphere really took hold. There is a very tangible feeling of longing and desperation found throughout this massive album. 6. Blut aus Nord - "777 - Sect(s)" [Debemur Morti Records]
Weird, abrasive, abstract... but, most of all, unique. This is a schizophrenic study in controlled chaos; insanity never sounded so good.

5. Autopsy - "Macabre Eternal" [Peaceville Records]
Eagerly anticipated and well worth the wait. This is what a comeback album should be.

3. Absu - "Abzu" [Candlelight Records]
With superb musicianship and a knack for what can only be described as "the epic and righteous," Absu's latest album furthers the legacy of their "Mythological Occult Metal" genius. Transcending any particular genre but pulling from many, this album is as fun to listen to as it is well written. 2. Mournful Congregation - "The Book of Kings" [20 Buck Spin Records]
Majestic funeral doom of the highest order and one very emotional listen. Mournful Congregation have become the pinnacle of their genre and continue to set the bar incredibly high with each new release. Slow and methodical but never stagnant nor boring, this is, in all honesty, not only one of the greatest albums of the year, but of doom metal in general.

1. Craft - "Void" [Southern Lord Records]
The triumphant return of a band who renews faith and lends excitement and vigor to a genre which has undoubtedly become a mundane and over-saturated pool of shit. With Void, Craft continues to embody the spirit and the very reason black metal appealed to me in the first place. While the legions of bearded flannel-wearers may not have much into which they can sink their teeth, Void is what it's all about.