Botanist's bizarre, black metal-oriented music has caught the ears of more than just the underground with this hermit's first release, a compendium of his first two albums, titled I: The Suicide Tree/II: A Rose For The Dead, released on the always-great tUMULt records. Seasoned music journalist Nathan T. Birk, whose name you might recognize from his Zero Tolerance magazine, interviewed the enigmatic Botanist some months ago, but only a small handful of The Botanists responses were published. With the blessings of both Nathan Birk and The Botanist, here is the full, uncut Botanist interview.

Nathan: What came first, the moniker or the concept?

The Botanist: If you mean the intellectual concept, the two were practically simultaneous. Names like Xanthostemon, Glycyrrhiza, Azalea, Nephrolepsis and Chiranthodendron inspired comparisons to the occult worship of entities like Nyarlathotep, Cthulhu, Pyrifleyethon, Azrael, Akhenaton, or so much of the familiar ring that the band and stage names the black metal world comes up for itself can have. These associations came up enough that harnessing the now-familiar theme of Nature worship in metal in a seemingly untapped direction seemed like the portal to an almost endless supply of thematic inspiration.

Is Botanist a political entity? Or is the 'eco-terrorist' tag a joke on a joke (i.e. Velvet Caccoon)?

My contrarian nature makes it that I like having some fun even within something that
isn't a parody. I like Velvet Cacoon very much, and I find their odyssey of alternating propaganda and then anti-propaganda amusing and fascinating for what it is, but there's no comparison to be drawn from that project's existence and the creation of Botanist.

All of Botanist's songs are told from the perspective of The Botanist, a man of science who fears and loathes humanity for all its crimes against Nature. Because of his abhorrence, The Botanist lives in seclusion in a place he calls the Verdant Realm, where he surrounds himself with flora. He sits upon a throne of densely tangled Veltheimia and awaits the coming of the floral apocalypse, The Budding Dawn, when humans will kill themselves or each other off, at which point the Earth can be reclaimed entirely by plants. The Botanist does not sit entirely idly: his chronicles of the Plantae World often feature how each specimen will help bring about the downfall of man. He is directed on how and when to act by the voices he hears in his head, the voice of the demon Azalea, the equivalent of The Botanist's Satan. In this regard, the concept of Botanist is eco-terrorist; Not in a political sense -- as politics would favor the cause of one group of people over another -- but in a blindly misanthropic one.

While a song title like 'Gorechid' has a whimsical facet, it is also about The Botanist's vision of the remains of mutilated corpses running down orchids, saturating their soil, the blood feeding them via the mycorrhiza. In The Botanist's world, this is the only fitting end for people. 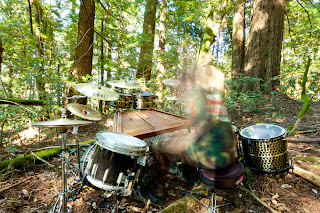 So, why hammered dulcimer?

I'm primarily a drummer. The music that flies around in my head is of a rhythmic nature -- when I get a brainstorm or musical ideas are really flowing through me, I primarily hear the rhythmic textures and progressions, or at least get a sense of that element first.

An instrument that allows me to approach making melodies by hitting things in time with sticks, allowing for application of essential drum rudiments and patterns, and where the possible pitches are all laid out chromatically before me, is the kind of melodic instrument that will be the most intuitive -- it will provide the most direct melodic conduit between what spins around inside me and what is able to be recorded.

Since 'I' and 'II,' Botanist has branched out to include, amongst others, an instrument that most associate with rhythm, the bass guitar. At least from my perspective, the way a bass guitar provides rhythm and melody is foreign and awkward in comparison to a dulcimer's: if you want a tone on a drum kit, you hit that spot. The same goes for a hammer dulcimer (although the margin for error is minute in comparison). While the bass parts turn out fine, they are always supplemental or supportive: writing on the bass is not a means from which inspiration seems to flow for me, while the dulcimer is the polar opposite.

So why not the xylophone, the steel drum, or the glockenspiel? It's how the hammer dulcimer is a stringed instrument, and as such yields tones and chorused harmonies that evoke a more classical sound, something that might evoke a little piano mixed with a harpsichord and a classical guitar. Classical music, with its melodic and harmonic progressions, or at least my interpretations of it, are major influences in how Botanist's songs are composed. So, of course, is black metal, as well as melodic drone... look for that last influence to play increasing roles in Botanist albums to come.
Black metal is at its most provocative when completely following the rules OR when breaking them completely, but rarely when between those two poles: discuss.

Something that helped shape my view on art and its creation is the view of limitations as tools, not hindrances. The idea that rules and guidelines are essential to force an artist to work on pushing the boundaries of those very rules and guidelines.

Botanist's initial chosen framework was to be within the realm of aggressive, metal-oriented music, and specifically black metal. That perceived canvas was chosen, as was the thematic concept, as well as the limitations of using drums, voice, and hammer dulcimer only within that canvas, and then also how many layers of each would be allowed for the records.

While it is a case of romanticizing to call the creation of the music summoning, it is actually the closest thing to the truth that I can convey. The first attempt ever at a Botanist song is the first track on the first record, 'Dracocephalum,' which heralds the rise of the beast of flora. After that song, and really after just about all of them, I had this finished piece, and in some powerful, wondrous, mystical way, I had no real idea about where it came from or how I made it. Listening back to the records more than a year after they were completed, when even the excruciatingly intimate details of their creation had began to fade from memory, allowing the music to be perceived somehow more like another person's work, the music seemed so weird and foreign. It was like an alternate entity within me -- perhaps call it my summoning of The Botanist, or my channeling of what black metal is to me via my image of The Botanist, the Verdant Realm, and the glorification of the archetype of the splendor of Nature -- had been invoked to the result that you can hear on the records. Part of that personal experience to me is comfortably familiar, and another part, the one that is wholly other, the subconscious unknown -- yet that is still a part of me -- makes my neck hairs stand on end.
Lastly, does Botanist have plans to play live? Or maybe already have?

It seems unlikely that Botanist would ever play live. That's not so much out of some notion that playing shows is counter-productive to misanthropy, but more because where does one find hammer dulcimer players to play in a weird black metal band? (If Botanist did play live, I would play drums and probably also do vocals). Take a look at images of hammer dulcimer clubs around the country and check how many people you can see under the age of 60, and who don't play folky music. If suitable, interested people would manifest, then playing live would be welcome... but considering Botanist was the catharsis that rose out of the frustration of proper bands with actual other people not working out...

-Jon
Posted by The Inarguable at 7:38 PM