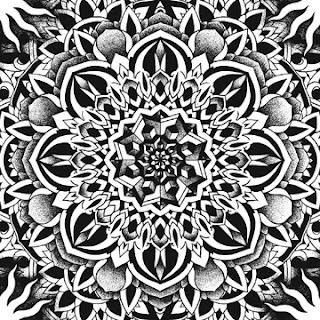 It's that time of month.
Sky Burial - Aegri Somnia (2011) [Utech Records]
Aegri Somnia is beautiful. Something about the packaging (the intricate art? the near-wordless approach? the self-containment?) is the sort of album you want to keep in a carefully hidden wooden box. It's a treasure.
. . . That said, that's not the reason I put Aegri Somnia in my top-2011 post. It's not the only time I've heard saxophone mixed into ambient/drone music (I live in Bruce Lamont territory), but it's definitely a favorite to date. Sky Burial creates the wide-open spaces of Tibetan mountaintops without the lazy empty drone of some records--Aegri Somnia takes the meterless pulse of Sunny Murray's best work and opens it to the space of ritually powerful ambient space. Nik Turner obliges just as well. His weaving, soaring saxophone lines really come across as the spiritual aspect of prayer, flying frequently from low register up into altissimo ululations.
Aegri Somnia never feels like leaving, so as I do when I'm listening, I'll move on to

Threnody for Collapsing Suns is like the antidote to Aegri Somnia. While it works in much the same way (without, of course, Nik Turner), the resultant feeling is mourning. Throughout Threnody for Collapsing Suns, you can feel the abstracted mourning of the death of something with the kind of rarified beauty that can only exist far from air. Drones, whistles, hums, warbles, rhythms abstracted.
Fine showings over and over again.