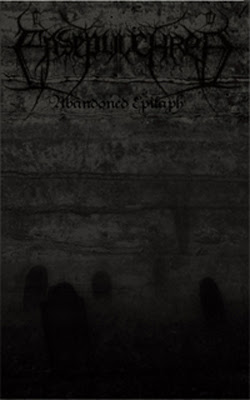 Posthumous release from the woefully undersung Ensepulchred, marking the inauguration of Cory Rowell's (Demonologists) new Skullheadfuck imprint.  This is some of the most frigid, machine-like black metal ever committed to tape, coming off like Xasthur stripped of every miniscule organic element or John Carpenter locking horns with Circle and Summoning.  Vestiges of black metal classicism remain in Ensepulchred's approach, with epic washes of keyboard majesty and throaty, choking vocals spitting out venomous vitriol over propulsive, mechanized double bass thrum, but beyond that you're thrust into an arctic world of barren minimalism and haunting, violent texture.  Ideologies position themselves at a frightening distance, with bizarre samples of reports of bodies being dug up under houses and makeshift homemade coffins polluting the music; these songs aren't about anything so much as mental deterioration and the absurd inner torment of aberrant psychologies.  The distance becomes as clinical a device as the music itself, allowing the band the necessary space to weave their intellectually complex and disturbing compositions.

What's crazy is that in an alternative universe (albeit a fucked up hypertechnicolor dreamworld of lurid sensation), the eight songs on "Abandoned Epitaph" could function as a brilliant pop record.  The keyboard riffs are so catchy, simplistic and overbearing they get stuck; some of them even teeter on the "bright" side of the spectrum.  It's a strange, strange feeling to process the sheer listenability of the music on "Mutilated Voices From Below" against the lyrical and sampled content of the track.  Murder and sexual abnormality never sounded quite as appealing as they do here; whereas an act like Whitehouse would be content to rub your face in the actual grotesquerie of the devastation and demand your contrition, Ensepulchred simply offer it up as an actuality void of judgment, an almost De Sadean stance regarding the ample and disparate pleasures of the flesh.  In that regard the horrific nature of the recordings is played up, evoking the philosophical subtexts of classic films like Clive Barker's "Hellraiser" or David Cronenberg's "Videodrome."  Sex becomes intertwined with machinery, itself already intertwined with violence.

Aside from the obvious black metal allusions, that violence manifests itself as sporadic bursts of grating tape degradation and static blasts of white collapsing noise.  "Procession of Murderers" and "The Final Labored Breath" both devolve into thick tangles of gurgling sound vomit, a relentless churn of sick manipulations and post-processing.  When read against the already damaged quality of the audio, these quagmires become almost hallucinatory, dragging you into a realm of disgust and wide-eyed terror.  There is an extremity at work here, be it in the textured noise assaults or the even rarer moments of Lussuria-like "cathedral ambiance" that punctuate the record; it's hard not to imagine these instances as homage to the first wave of Norwegian black metal, with their musically religious overtones (although maybe I need to veer away from the idea of a pipe organ being almost synonymous with church services.)

Ensepulchred never really got the exposure I feel they were due.  With this tape (limited to a mere 44 copies), Cory Rowell and Skullheadfuck seek to expose the band's work to a newer audience more attuned to their particularly potent mixture of black metal, noise, and brutally dark minimalist ambiance.  Anyone looking to follow the devolution inherent in Xasthur's masterful "Defective Epitaph" (note the similarity in title) or the utter impenetrability and emotional distance of sexualized power electronics would do well to check out Ensepulchred.  They were one of few bands to actually advance USBM beyond its obvious avant-garde template.  Obscure, disturbing, and freezing cold as fuck.  Skullheadfuck might have a few copies left.