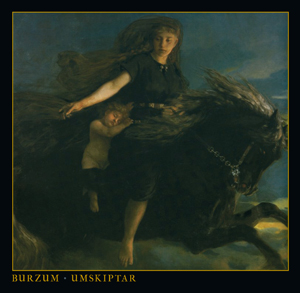 By this point, Varg Vikernes' post-incarceration discography is almost equal in size to the work he left behind prior to serving his term for the murder of Euronymous.  It's difficult to assess Burzum as one whole entity anymore; the two phases of the band position themselves from wholly different ideological and, by extension, musical standpoints.  The records created in the 1990's bear the mark of anger-fueled rebellion beginning to incorporate a larger philosophical scheme-the landscape of Norway (and the actual destruction of it) as a metaphor for a fear of modernity and a desire for the primitive, both religious and cultural.  "Aske" and "Burzum" were youth statements, a distillation of influences honed into the beginnings of an individual separatism, the tendrils of removal as made actual through crass imagery, music, and action.  The church burnings meant something; the music reeked of smoke.  By the time Burzum unleashed "Filosofem," Vikernes' views were reaching definition and the music reflected a deeper search for understanding, of both the self and that self's relation to the culture of the world as a whole (as viewed through the Norwegian microcosm.)   It's simply foolish to deny the influence "Filosofem" wields over black metal-Vikernes pretty much wrote the template for modern BM architecture.

When weighed against the accomplishments of the past, Burzum's post-incarceration material seems oddly distant from what once was.  Certainly two decades of absence from society changes a person, and the overall tone of Vikernes' new offerings is indicative of lengthy bouts of self-reflection and focus.  Burzum have no interest in a scene, no real interest in growth, and certainly no interest in critical appraisal.  By 2012, Burzum simply is.  The ideology has become one born solely of Varg without outside influence; the primary compositional themes are ancient mythology and a deep-rooted inner consciousness made manifest by a personal will to power.  His detractors will soon have to acknowledge that Vikernes has moved beyond the accusations of Aryanism and reached a philosophical precipice based on a distinct break with reality.  There is little intellectual grounding for Burzum's position anymore, so personal is its creator's obsessions.

So where does the post-incarceration trajectory leave us?  If "Belus" was a masterful extension of the work begun with "Filosofem," "Fallen" a simple and derivative reiteration of the current path being mapped, and "From the Depths of Darkness" an ill-conceived attempt at harnessing nostalghia, the new album "Umskimptar" is Vikernes' stab at reinvention.  Here Vikernes tries to recast Burzum in the mould of "Daudi Baldrs" and "Hlidskjalf," fusing the ancient to the mundane without the crutch of limitation to cushion the failure.  "Daudi Baldrs" and "Hlidskjalf" were of interest primarily because they were created under extreme duress and represented the only conceivable direction for the band to move in given the circumstances.  Musically they were almost void of ideas and bore little or no relation to the mighty hypno-symphonies Vikernes had created prior; they were simply new Burzum records created in prison.  It was fucked up music emerging from a fucked up scenario.  "Umskimptar" doesn't have that luxury.

This is the first Burzum record to flat out bore me.  There's no atmosphere, no aggression, and very little depth.  It's a Norwegian history lesson given under the auspices of BM grand master Varg Vikernes, and its pretension is equaled only by its bloated self-insistence.  Sixty-five minutes becomes near an eternity, and not in the mesmerizing manner of "Jesus' Tod" or "A Lost Forgotten Sad Spirit."  This is corpulent banality and horrific self-cannibalization, with monotony masquerading as expanse.  Tracks like "Joln (Deities)" and "Hit Helga Tre (The Sacred Tree)" merely recycle the compositional structures found throughout "Belus" without any of that record's immediacy; much of the material here is grinding, slow, and amateurishly elementary.  The riffs are absolutely directionless, building up to towering mountains of belligerent nonchalance.  The ridiculous pinch harmonic riffing that punctuates "Valgaldr (Song of the Fallen)" only accentuates the utter tunelessness of the song as a whole; at its worst it becomes an in-joke regarding cliches of metal that Vikernes either doesn't get or doesn't realize exist.  This lack of awareness is rendered all the more tragic by the classicist (and frankly lovely) arpeggios that anchor the song's latter half.  You want there to be something more, but there isn't.  Just knowledgeable posturing.  Vikernes knows the rules, and he can certainly write the riffs-fuck, he wrote most of them twenty years ago-but he doesn't know how to interpret them anymore.

The tail end of "Umskiptar" is where Burzum really falters.  Nearly 30 minutes of drumless guitar and voice extrapolation disguised as merit, an evocation of the "ambient" end of "Filosofem" that wretchedly mistakes formlessness for ambition.  Vikernes seems to be reaching for something easily achieved by bands like Death In June or Current 93, a sort of weightless appropriation of traditional folk song tropes that manage to extend beyond their structure into pieces that bleed resonance, a kind of reinterpretation as artistry.  Vikernes' harnessing of those forms becomes an exercise in tedium, a taxing wash of minor key melodicism thrown against spoken word readings of supernatural occurrence.  Burzum's relationship to Tolkien has never seemed more juvenile than it does across the final four songs of "Umskiptar"; the fantasies seem to overtake whatever realistic intentions Vikernes may have had for the work.

It saddens me to be so nonplussed by a Burzum album.  Even at their worst, Vikernes' works were indicative of a certain sort of reclusive genius.  There will never be a day when I do not hold Burzum in near-sacred regard; no artist has so thoroughly embodied what black metal is and should stand for.  Even the rank opportunism and arguable pointlessness of "From the Depths of Darkness" was tempered by the unerring strength of the material and the passion inherent in Vikernes' reworking of it.  These songs, this genre, despite all his protests to the contrary, meant something to him.  On "Umskiptar" the very idea of black metal comes across as a stale exercise.  This record is lifeless.  It lacks the fire that inspired Vikernes to take flame to church so many years ago.  As heinous as his act was, Vikernes' reasons for murdering Euronymous were on some level rooted in his ardour for the strength of the music he had created.  Black metal can stand for something.  "Umskiptar" is simply a matter of business.