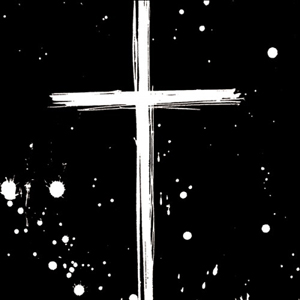 Latest release from drone/doom punishers Monarch!, a crippling tapestry of brooding, spectral emptiness fused to the sheer magnificence of power chord obliteration and the blackened sanctity of nighttime mutilation ritual.  Not only the most cohesive, satisfying release from the band to date, "Omens" also marks a significant growth beyond their usual staunch adherence to Khanate-like levels of patience-testing, time-stretching feedback symphonics.  Rather than epic eternity length songs barely hung on ringing strains of molten feedback, the three tracks on "Omens" represent one considered and sensible composition with a dynamic flow and a manipulation of theatricality.  This recording is miles beyond the stop/start stagnancy found on 2010's "Sabbat Noir"; where they once labored beneath the weight of their own impending regression, Monarch! have improved upon a template steeped in simplicity and born an opus worthy of bloodletting.

"Blood Seeress" opens the record in a wash of bowed cymbals and grating drone, quickly collapsing under the density of thick, bileous amplifier vomit and a storm of screaming feedback.  There's an army of guitars employed here, all working towards the same place of bludgeoning neutrality and nullification.  The drums hardly advance beyond a brutal patterned emphasis, hammering home every chord with nary a derivation.  It's a calculation made for the greatest efficacy, and it works.  The whole thing becomes ritualized, a paean to the darkness total, with Emilie Bresson's vocal ululations reaching a level of intensity and violence merely hinted at on all of the band's previous output.  It's incredibly apocalyptic, an illustration of the nihilism inherent in the best doom metal, a sort of suicidal call to action that virtually demands the listener lay out their arms and take the knife to them direct.

"Blood Seeress" gives way to the brief interlude "Transylvanian Incantations," a dirge of lurid keyboard and vocal ambience that plays like the soundtrack to a vampire giallo film, all tortured sensuality and menacing allure.  Here Emilie becomes the mystery, the suggestion beneath layers of veiled translucency and gauzy stasis.  Like Tim Hecker covered in viscera or Troum washed in blood, "Transylvanain Incantations" is the sort of successful stopgap track that works marvelously as its own composition, obviously related to the record as a whole but standing starkly apart from it in its ghostly beauty.  It's both a promise and a threat of things to come.

And come it does.  Closing track "Black Becomes the Sun" is easily the best Monarch! song I've ever heard (and I've heard them all, many times), as well as one of the finest moments in modern doom metal, a stunning piece on the same level as material from Loss, Asunder, or Worship.  Imbued with a gorgeous melodicism redolent of the best Nadja recordings, Monarch! summon great oceans of sloughing sludge and shape them into overwrought sequences of crushing, heartbreaking emotional resonance.  Emilie's vocals here are positively angelic, the mournful cries of an angel ripping itself apart as it realizes the futility of compassion in a world suffocating with cynicism and selfishness.  This is the first time I feel she's lived up to the "chanteuse" tag she's been marked with; her vocal work is incredibly yearning and lovely.  Everything here works in concert, one massive onslaught of destruction and beauty limping towards an inevitable disintegration.  By the time the song falls apart into a mess of oozing drum technique and Stephen O'Malley drone worship, you're so floored by the ethereal intensity of the composition proper that the 10 minutes of hanging chords and vocal histrionics at the end seem like a relief.  Words seem inadequate to describe the immensity of "Black Becomes the Sun"; best to simply listen and lose yourself in it.

Part of Monarch!'s apparent maturity here must surely be owed to the staggering number of guest musicians employed.  I can only imagine some of the tarpit tone on display is courtesy of  Robert MacManus (ex-Grey Daturas), and some of the intricately layered guitars must have something to do with the input of Thisquietarmy's Eric Quach.  "Omens" is something beyond a rote doom metal record-it's an example of what's possible when doom and shoegaze aesthetics come together under the guided hands of seasoned practitioners.  The only contemporaries I can even think of for what I here on "Omens" are Nadja and The Angelic Process, two more projects that grasp the overwhelming transcendent power of bliss and sorrow joined as one.  Monarch! have created a masterpiece.  One of my contenders for 2012 record of the year.

Email ThisBlogThis!Share to TwitterShare to FacebookShare to Pinterest
Labels: 2012, At A Loss, Cory, Monarch, Review