Benighted in Sodom - "A Premonition of Miracles Undone" (2012) [Solitude Productions] 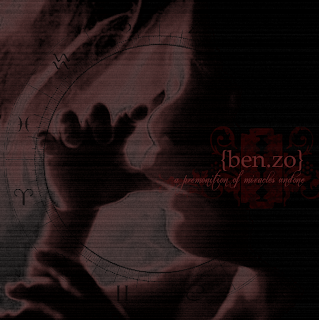 It is always a shame to see a band go. Reuben "Matron Thorn" Jordan's Benighted in Sodom project has been a consistent source of some of the most unique, distinct music on the dark, blackened end of the metal spectrum. Known to release multiple albums and unannounced EPs within a year's span, Benighted in Sodom's consistent, yet constantly evolving, sound proved Jordan to be the one of the first to incorporate such alien styles as darkwave and post-punk into black metal, placing Benighted in Sodom alongside the neo-French "post-black metal" scene's beginnings. Sadly, after eight years of activity, Jordan has decided to end Benighted in Sodom, leaving behind hours of unfinished works and one final album, A Premonition of Miracles Undone.

Initially intended as the third and final chapter of the In Hora Maledictus triptych, whose first two parts were released in 2008 and 2009, A Premonition of Miracles Undone stands as the strongest release in Benighted in Sodom's sprawling "thirty-three something" part discography. All the expected Benighted in Sodom elements are here, the warbly guitar tone, Jordan's crystal clear diction, and an obsession with the 1980s goth subculture, which manifests itself at its most apparent on the gloomy mid-paced "Oneiric Eternity." However, even with the troves of synthesizers and miserable dance beats, Jordan manages to tap into the aggression found in the earlier In Hora Maledictus chapters, and maybe far enough back to cite his raw work on Plague Overlord. On "Aberration," one of the album's more aggressive, blasting moments, Jordan steps back from the microphone to lend his project a new voice, that of Woe's Chris Grigg, whose chaotic, almost grindcore-suited screams fit perfectly alongside quick-wristed session drummer Gionata Potenti, who's been on too many records to name.

As far as "final" albums go, it is comforting to see Benighted in Sodom leaving on a high point. So many bands wait until they've gone so far South that not even a "farewell" tour couldn't forgive their transgressions against music, but A Premonition of Miracles Undone stands as Benighted in Sodom's most concentrated work. Moving the Maledictus series to a close, the morally deprived anti-hero is transfigured into a "purified malevolent entity," as Jordan told me in an interview a few years back, ultimately becoming the epitome of pain and negativity. "Much, much pain," he adds, and it is true. The depressed atmosphere is intoxicating, making the pain this entity experiences almost tangible. With every new aspect of his transformation comes new scars and unspeakable misery. A fitting, almost allegorical ending to Benighted in Sodom, whose depraved, hedonistic approach to "gothic" black metal, A Premonition of Miracles Undone has brought about the end of our anti-hero's story, and ultimately cut the project itself's thread short. Thank you, Benighted in Sodom, for many years of quantity and quality.

-Jon
Posted by The Inarguable at 8:48 PM