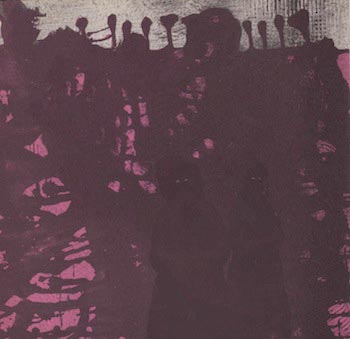 With the "hypetrain" mentality of so many labels in music's current era, it's nice to see an underdog receiving so much positive attention. I see so many "controversial" blogroll bands being picked up by "bigger" labels that it almost defeats the purpose of finding new bands. We already know about them! It all seems rather lazy, waiting for some musical act to gain notoriety before deciding to snatch them up. I thought independent labels were all about the underdog, the new, fantastic artist who spits in the face of convention and helps redefine what a "scene" might consider music. That's not to say already popular bands don't deserve the credit of being picked up by a new label; I mean, if they worked hard, then, by all means, a bigger label is definitely the route to take, I just feel like we seem to be stuck in a sort of rut right now, which is why I find Handmade Birds's upcoming release, Texas deathrock newcomers Pinkish Black, to be one of the most exciting releases of this year.

After my various post-punk-related reviews and features over the past few months, my love of deathrock/post-punk/goth rock/peace punk/lots of other slashes should be pretty apparent, but Pinkish Black definitely takes the cake for "most intriguing" post-punk band I've heard in quite some time. Stripping instrumentation down to  a single voice, an arsenal of synthesizers, and a drum kit, Pinkish Black's "bad acid trip" psychedelia could be considered akin to early Nick Cave band The Birthday Party on even more drugs or if Danny Elfman's old band Oingo Boingo was launched even further into space. With only three key elements to the band itself, entirely lacking a bass guitar in any shape or form, many post-punk purists (aside from synthwave fans) will definitely be turned off, but only at first. What's deathrock without a bass guitar, anyway? Well, have no fear, my eyeliner-clad friends, because Pinkish Black do the style justice with a multi-layered, "full band" sound, mastered perfectly by the great, always busy James Plotkin (who has a collaboration with percussionist Jon Mueller coming out this summer on Taiga Records, but more on that later).

Everything on Pinkish Black's self-titled debut is decidedly dark, be it the buried vocals, the grating, low-end synthesizers, or the song titles themselves, boasting names like "Tell Her I'm Dead," "Tastes Like Blood," or "Bodies in Tow," but, when the band's name itself refers to a former band member's suicide (apparently the walls were "Pinkish Black" with gore), darkness only seems appropriate. Naturally, the musical partnership of Jon Teague, whose name you might remember from Texas band Yeti, and Daron Beck takes their own negativity above and beyond, leaving behind traditional deathrock leanings to embrace doom metal's sinister crawl and, for a brief, shining (perhaps not the best word to associate with this band) moment in "Tell Her I'm Dead," Teague injects a few cc's of adrenaline straight to the song's jugular, bringing the band to a mid-paced, blackened blur, atmospherically paired with the only harsh vocal delivery on the whole album, handled by Beck. Oh, and what deathrock album would be complete without an homage to the the style's forefathers, the great Christian Death? It turns out the first 100 preorders come with a floppy disk (weird, but I can deal) containing a masterful "Spiritual Cramp" cover.


Pinkish Black is a brave outing into an otherwise conservative genre (amazing that a style championed by anarchists could be so rigid), but their masterful approach toward atmosphere and texture could definitely garner Beck and Teague some hope as the "dark horse" on many a year end list. I'm definitely glad Handmade Birds' sole proprietor R. Loren reached out to such a fantastic local band - hopefully his adventurousness will lead to the discovery of more quality "hometown" bands. If you didn't listen to Pitchfork, at least take my word for it - this is a killer album. Pre-order now from Handmade Birds.

-Jon
Posted by The Inarguable at 1:10 AM