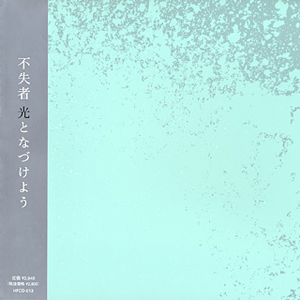 The completely unexpected (but beyond welcome) return of Keiji Haino's dark star destruction unit Fushitsusha, resurrected with the assistance of original drummer Ikuro Takahashi (who also marked time in the equally obliterating Kousokuya) and bassist Mitsuru Nasuno (with whom Haino shreds in Seijaku.)  Haino has kept himself busy with all manner of music since putting Fushitsusha on indefinite hiatus in 2001, but his most recent recordings, most notably his trio outings with Jim O'Rourke and Oren Ambarchi, have focused on a return to the staggering simplicity of blundering, crushing rock and roll primitivism performed with reckless abandon, as though Haino were discovering himself all over again.  Little wonder then that he would revive the group he made his name with; legions of guitarists (myself included) worship at the altar he so casually but brutally erected in the early '90's, a testament to the ultimate nihilistic powers of the electric guitar when brandished by someone so attuned to the cosmos' nether pockets.  For all his experimentation, Keiji Haino is the very emblem of true sonic violence, caustic and extreme, barely held together by tendrils of mystery and a hazy aura of cool that never once threatens to overtake the awesome power of the music.  Haino channels darkness, and that darkness becomes a living entity, crawling and oozing its way into frontal lobe eradication.

"Hikari to Nazukeyo" isn't a return to peak form as much as it is a return to peak attitude.  It's incredibly aggressive-Haino's vocal histrionics throughout are some of the more intense he's delivered in his lengthy career-but it's also remarkably tempered and calculated, given over more to the idea of structure than almost any Fushitsusha recording preceding it.  There are actual songs here, influenced as much by new wave impressionism and krautrock numbing theatrics as it is Haino's beloved delta blues by way of Blue Cheer.  The sounds here are more vital, visceral, and urgent than anything Haino's laid down in the past decade.  That he blows it out of the water in a mere 35 minutes without sacrificing any of the ragged rock glory is fucking insane to me.  Fushitsusha is a band built on excess; here it's streamlined, maybe even mainlined, into a virulent feed of rock bloodletting that constantly reignites itself with each mangled note.  And there are plenty of them throughout.

The highlight of any Fushitsusha record is Haino's severe and particular brand of guitar holocaust, and "Hikari to Nazukeyo" delivers in spades;  most of the tracks here revolve around Haino's frenzied guitar mangle.  The obvious peak, as well as the most "classic" sounding jam here is "Chuushin no Ketsui I," an excursion into pure molasses lightning sludge, an inferno of feedback shriek and amplifier gurgle filtered through stuttering bass and an incessant staccato drum.  Haino's guitar is in the grave and buried, clawing away at mounds of dirt to reach the caustic night sky.  Bitterness rages and danger ignites on its own fumes, a dirge to hell that considers the sky the equal of the earth.  "Todomi Yari Hou (Zenkaku Supesu 2)" continues along those same hellish lines, adding Haino's black-metal tinged vocal (vokill?) to the mix for ultimate audio meltdown.  It's the very essence of metal distilled into four simple punishing minutes, the epitome of "heavy" without any of the pretense, and totally free of any constraint.  "Chuushin no Ketsui II" sees Haino in a more classic "shred" mindset, with a slaughter of notes being sent to the great musical beyond in a fiery torrent of careless and wanton obliteration; the flurry of distorted bass notes that closes the track (and the record) out almost seems relief after Haino's towering conflagration.

The magic of the record lies in the curveballs.  Haino is nothing if not unpredictable, and for all its black hole aestheticism, "Nikari to Nazukeyo" is lush with iconoclastic departures from the formula.  Opener "Mada Hikato Nazukerarenai Mono" eschews guitar completely in favor of grinding yet melodic bass rumble, allowing Fushitsusha to approach an approximation of melody and form not yet harnessed.  It's a surprise to say the least, and points to the eclecticism that Haino so casually summons up when the mood strikes (this is also one of the few Fushitsusha albums that doesn't feature artwork done entirely in black and white, perhaps indicative of its multifaceted ambitions); all of that eclecticism here becomes a rainbow prism of expression, a technicolor explosion of passion and authority.  "Ore no Wake Mae" features actual riffing within the chaos, confused and bludgeoning and chromatic but nothing short of blunt.  "(Shire Ru) Toiukoto" is some sort of devolved lounge song, jazz let free to lord over the Slayerized constructs of elevator hell.  Haino goes even further in his outre reference and evokes Frank Zappa in the gorgeous atonal but hypermelodic soloing found in "Aredakeha," recalling Zappa's live improv'd stylizations rife with gorgeous clean guitar lines and plucky tone; like Zappa, Haino exerts total control over the proceedings at hand but lets the musicians wander where they may within a certain definition.  Psychedelia gives way to frigidity and a sort of oversaturation void of welcome; despondence retreats into the foul.  Haino's breakthrough is attained via noise and horror.  As a whole "Nikari to Nazukeyo" recalls Haino's work with his death folk/rock band Aihiyo more than anything under the Fushitsusha moniker; there's a sort of spiritual blackness here that seems more birthed from traditional forms and outdated modes of rock extravagance than the apocalyptic hollowness of Fushitsusha proper.  But the mission remains unchanged: annihilation through provocation and majesty by way of deathly grandeur.

Seeing Haino live at the Walker Art Center several years ago was one of the highlights of my life as a musician.  I'd rarely seen anything so unabashedly antagonistic towards the audience (with the exception of the Melvins on their "2 X 4" tour) and it cemented my fervent belief in volume as a means to expression as well as aesthetic.  Haino here confirms that my adulations were not misplaced; the sheer intensity present throughout "Hikari to Nazukeyo," despite its brevity in comparison to other Fushitsusha recordings, should be more than enough to satisfy those searching for an antisocial musical outlet.  This is punishment wrapped around the vestiges of beauty, blanketed in distance and abysmal anger.  Few can muster up the vitriol in their youth that Haino does at 60; Fushitsusha to me are more metal than any band in existence.  They work off of the sound of freedom and tap into the blind ether of rebellion, emerging with music that comes to define "rock and roll."  Purity of expression fuses to the monolithic belief in a very narrow ideal born of a far-reaching love of music as is.  Fushitsusha equals the transcendent.  This is a record that goes way beyond, and it will reward your willingness to follow it into the nothing it constantly creates before itself.  I know it's early into 2012, but this is another one of my contenders for record of the year.  If you have any interest in extreme music, or just music in general, you need to hear this.  It will both destroy and transform.  Highest possible recommendation.