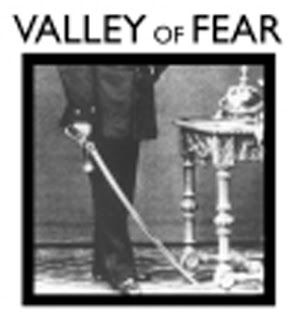 Holy shit.  Forgive the terrible cover scan, but after hearing this I knew I had to write about it immediately.  Valley of Fear is a devastating new project consisting of Justin Broadrick, Matthew Bower, and Samantha Davies that trips to the very end of frigid psychedelia, a numbing sojourn to the emptiest places of human experience.  Sounding as much from the void as anything Matthew Bower has touched, Valley of Fear refines and streamlines the black metal aestheticism he's been flirting with across the last several Skullflower records and harnesses the wilds of pure electricity into a choking sonic blackness.  To me, this record is a more perfect summation of black metal than any orthodox recording could ever hope to be-the meeting place between these three (or, more precisely, two, since Bower and Davies make up BM droning wasteoids Voltigeurs) is a windswept landscape of utter nullification made physical and prescient-and exemplifies the ultimate power of reach capable with guitar deconstructionism.

Matthew Bower is easily one of my favorite musicians on the planet.  Everything he does bears a rotted mark of abuse and fecundity as well as a yearning for transcendence.  Few modern guitarists have so thoroughly explored the outer limits of the instrument's capabilities, scratching at the ceiling of heaven whilst being torn asunder by the weeping winds of hell.  Bower shreds, but not in any classically musical sense.  His mastery and expressionism comes in the form of expansion, a willingness to reach beyond and go deeper.  There's a sense that the sounds are summoned and felt rather than played, lending a ritualistic approach to all of Bower's various projects.  Bower's universe is one of mistakes and failures made into the raw stuff of actuality, where possibilities become regurgitations born into hazed-out microcosmic universes of hollowed out nothingness.  Matthew Bower is a specter and his music is the endless purgatorical mania that precedes him.  Valley of Fear is that purgatory given propulsion and definition, the blunt swarm of vacuity honed to the glinting steel of menace.

Almost all of that shaping is owed to the not insignificant contributions of Justin Broadrick, here stepping away from the comfort zone of Jesu into a musical pasture much more evocative of his actual interests and capabilities.  While the overall sound of Valley of Fear is fairly bludgeoning when weighed against the formless, treble-cutting worlds of Skullflower's output, Broadrick is actually retreating deeply into minimalism here.  Broadrick's programmed drums are simplistic, almost martial, and bear the distinct mark of Godflesh's industrialized flatlining, closer to the washed out goop of his recent project Grey Machine or his decades-old forays into techno, than the lush, immersive, melodic textures of Jesu.  The negative space of Final can be heard here as well, as Broadrick cloaks Valley of Fear in an atmosphere of bitter, haunted nostalghia and reflection.  This plays in to Bower's take on black metal as the sound of human wretchedness and irreversible failure, a sum total of weakness, rage, and regret.  This is perhaps some of the greyest music ever put to tape.

Most impressive, though, is the hive mind of psychedelia conjured by the three.  Bower, Davies, and Broadrick all play guitar here and the resultant din is a megalomaniacal swarm of indulgent soloing and crushing discordance.  Broadrick in particular embraces the idea of implosion, giving in to a relentlessly obvious concept of "heavy" without sacrificing the callous intellectualism of the project as a whole.  As Voltigeurs, Davies and Bower embrace a sexualized aura of violence that relies heavily on blunt excess, and Broadrick taps into that in his playing on the record.  His palm-muted dirging reaches something of an apex here, for me eclipsing anything he did under the Godflesh moniker.  I might take some shit for that, but I truly believe the presence of Bower and Davies has opened Broadrick up to the majestic grandiosity of regressive excess.  Bower has always advanced a "maximalist minimalism" mantra throughout his work and Broadrick gravitates towards it beautifully, wantonly, as though realizing that the sound of Bower's collapsing psychedelic negativity is what Godflesh was striving for all along.  With the pretense of "metal" removed from the equation, the music becomes something larger and more frightening, more inexplicable and meandering, than the confines of commercial structure could ever allow.  All three players claw at the stars on this one, their guitars winding and screaming in a desperate bid for the ends of the known.  This is pure mystery woven into sound, the utter unknowability of existence transformed into something essential and visceral.  Immediacy wed to the forlorn.

Valley of Fear documents a landmark meeting between two of the most important musical minds of brain-frying "metal" of the last thirty years and is simply not to be missed.  This record is absolutely everything I could have hoped for, bluntly wedged into a scant thirty minutes that feels like thirty lifetimes.  Placing this within any context or genre seems far too limiting, despite the record's obvious homages to black metal, as well as Broadrick and Bower's shared industrial past.  Legion Blotan (and its parent label, Turgid Animal) have been quietly releasing some of the most wicked, excessive, and raw BM-connected recordings currently available, and this monumental recording is no exception.  For me, this sort of music is more powerful and arresting than almost anything else currently available, and it receives my highest possible recommendation.  It's a high mark for the more extreme side of psychedelia as well as a defining moment in the works of both Matthew Bower and Justin Broadrick, and it deserves the full attention of anyone even remotely concerned with the idea of transcendence through music.  A record of the year contender for me.  Just masterful.