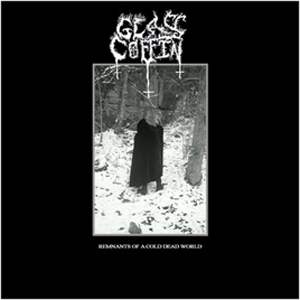 Crucial Blast's art-oriented sub-label Crucial Blaze churns out another highly impressive release in the form of Glass Coffin's regressive black metal filth pool "Remnants of a Cold Dead World," as primal a piece of underground BM sludge you're likely to hear this side of 1992.  Taking almost all of their cues from Mayhem garage demos and Darkthrone rehearsals, Glass Coffin play a simplistic, devolved style of black metal that owes more to the rebellious attitude behind the original wave than it does the actual sound.  At times reminiscent of black metal forefathers Bathory or Hellhammer, Glass Coffin exist in a purely encapsulated mode of expression, one where musicianship slits the throat of musicality and leaves a bloodied, shredded corpse.

There's a distinctly noisy edge to "Remnants," not surprising given that the sole instrumentalist, JL, performs as one half of ambient sludge droners Swamp Horse, but here the focus is on trebled-out severity rather than suffocating pillows of marsh waste and fecund tone baths.  Everything is played in a reckless, almost-haphazard manner, with each instrument seeming to stumble over the others in a race towards the end of every song.  Bass is virtually nonexistent, given over to warbly, fuzzed out skronk guitar and crude (but effective) drumming not unlike the early faerical primitivism of Nuit Noire.  JL's vocals are a buzzing rasp of vitriol, fragile electricity buried under musky dumps of mud and soil.  Swathes of melody surface here and there, such as the chorus riff on "Unholy Ritual" or the eerie intro piece "Soul of Iron and Ice," but mostly Glass Coffin revels in the blinding chromaticism of black metal's forebears, proudly waving the flag of bedroom isolationism without any of the suicidal pretense.  This is BM that derives as much from Slayer as it does from Fenriz; listen to the lightning riffing on "We Bleed the Blood of Hate" or "With Vacant Eyes, I Kill Again" and try to find yourself not transported back to the "Hell Awaits" era of trill-heavy fret abuse.

Normally the sort of regressive tendency displayed by a band like Glass Coffin is complicated by the specter of poor musicianship; too often "primitive" means "played like shit" without regards to any sort of actual musical quality.  Intent is passed off as legitimacy.  Glass Coffin eschews that, never once giving the impression that the music is half-assed or impugned by a lack of talent.  "Remnants of a Cold Dead World" is conceptualized and performed to achieve a very specific end; wherein the overall sound of the record comments on the influences and thematics behind it.  This is black metal beamed out of the tape trading days; one look through the gorgeous zine of artwork (all by JL himself) accompanying the release betrays the ideas at work.  Ghouls, zombies, revivification, and the sweet stench of violent death all hold court.  Not unlike the modern death metal revival defined by bands like Encoffination and Vastum, Glass Coffin's approach to black metal is rooted in classicism and reverence, an evocation of a very narrow, specialized sound synonymous with a very particular era.  Listening to this makes me feel like I'm 17 again, digging "Deathcrush" out of a record bin for the very first time and feeling like I'm holding the key to something greater in my hands.  Glass Coffin works a dark magic with a dedicated potency and an intimate knowledge of the necessary components.

"Remnants of a Cold Dead World" is 31 minutes of bloody pentagrams, sparkling stars, and glinting knives, the sort of backwoods ritualism found in the music of contemporaries like Tgoltjar and One Master (with whom Glass Coffin recorded a split) without any of the retreats into brain-frying psychedelia or elegiac elegance.  This is merely crude, simple, but devilishly effective black metal played in honor of the old masters, implying a mist of Satanism and a disgust with modernity.  This record glorifies retreat and regression, a tromp through the nightwoods of metal history.  Crucial Blaze has unearthed a gem here and given it a luxurious treatment, with packaging, artworks, and extras that seem on par with anything boutique label.  "Remnants of a Cold Dead World" is limited to 200 hand-numbered copies, available from Crucial Blast.  File this one next to Horna, Sargeist and the like and raise the horns in reverence of the night.  Black magic is upon us.

Posted by The Inarguable at 3:38 PM