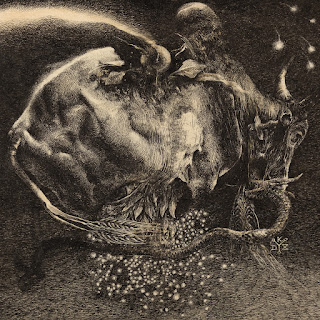 Though musician Jenks Miller lives out towards the East coast, he sure knows a thing or two about "out West." Covering more stylistic ground than most are afraid to even touch with his solo project Horseback, Miller's stylistic nods to composer Ennio Morricone and Americana enthusiast Neil Young are as tasteful and refreshing as they are unique and solely his. Even with the drone effort Impale Golden Horn and his noisy black metal affairs Forbidden Planet, his split 7" with fellow progressives Pyramids, and the Mlih Ihvh EP, though the ideas are much more buried, the distinct "spaghetti Western" influence remains the same. The idea of celebrating Americana as a music style in metallic form in a time of political unrest and a general distaste for the country in "modern" (read as: post-2000 experimental stuff) seemed more like a dream than reality to those of us who truly appreciate Ennio Morricone's portrayal of the American West in the Sergio Leone trilogy, yet Miller's laid back approach to extreme metal's various forms, save a few, has made Horseback one of metal's most promising "new" acts.

With Half Blood, Horseback's newest full-length since 2010's limited Forbidden Planet, we see Miller furthering his love of neo-Americana, bringing in further influence from his project's other sonic incarnations, as well as a heavier dose of spaced-out krautrock. Yes, as the title implies, Half Blood manifests itself as a kaleidoscopic view of Horseback as a whole. While Miller's iconic, sleepy classic rock groove serves as the album's centerpiece, with slow-burners "Mithras," "Ahriman," and "Arjuna" basing themselves around headbobbing, singular grooves, Miller slowly begins to incorporate a wider spectrum of sounds as the album progresses. Near Half Blood's middle lies "Inheritance (The Changeling)," which acts as a sort of game-changer and sets the tone for the second half of the album. Based in a quiet, growing organ drone drone, this "changeling" puts Miller's signature blackish, distorted vocals in new light, often left unseen by fans of this sort of music: power electronics, albeit without the hateful lyrical content. Although noisy and a bit of a departure for a Horseback "doom" album, as opposed to a noise, drone, or black metal release (newcomers will slowly learn of Horseback's many, Brahmanic faces), layers of chiming piano work their way in, turning "Inheritance" into the mutant child of Ravi Shankar's backing band and Dom Fernow's quieter moments in Prurient. "Arjuna" follows suit with some cleaner guitar and bass work, though maybe just in comparison with the previous track, as well as the first inclusion of clean vocals on a more metal Horseback album (if you recall, Miller's clean voice was heard on Impale Golden Horn's "Blood Fountain"). Closing the album is the twenty-two minute Hallucigenia triptych, whose droning, krauty atmosphere is similar in scope to The Inivisible Mountain's "Hatecloud Dissolving Into Nothing," or even the first track from New Dominions, his collaboration with drone masters Locrian, though with much more concrete sections which one can follow. Emerging as a quiet, noisy drone with meandering guitars and Miller's quiet rasp, Hallucigenia slowly morphs into an Amon Duul II-like krautrock masterpiece, rife with gorgeous layers of organ and guitar drones.

Thematically, Half Blood deals with various ancient mythological and religious figures. Album openers "Mithras" and "Ahriman" are named for the dichotomous gods worshiped in Zoroastrianism, Mithras, who is depicted in Denis Forkas Kostromitin's outstanding artwork, acting as the god of light and positivity and Ahriman his darker counterpart. "Arjuna" is named for an ancient Hindu warrior-archer whose name is synonymous with "silver," "bright," "shining," or "white." Most of you might know Arjuna by his more popular name, Vishnu. The Hallucigenia triptych is dedicated to the works of Hermes Trismegistus, whose Emerald Tablet, which is referenced in Hallucigenia III, supposedly revealed the secrets of alchemy. Perhaps not intentional, but with Mithraism's initial competition with Christianity, Half Blood's sound-incorporating progression takes on a bit of an allegorical stance. As one may recall, Christianity has been known to incorporate different elements of other religions as a means of converting conquered locals. The concept of a positive deity ("God") and a negative being ("Satan/Lucifer/Beelzebub") is based on Zoroastrianism's Mithras and Ahriman. Karma, Hinduism's law of good deeds garnishing positive consequences and vice versa, manifests itself in Christianity as a positive, pious lifestyle guaranteeing oneself a spot in heaven and, again, vice versa for negativity and a denial of Christianity's god. Again, perhaps this is unintentional of Mr. Miller and could very well be a product of overspecialization, but I feel that Half Blood acts almost as an allegorical mirror to Christianity's "inheritance" (see what I did there?) of Eastern religious philosophy over the ages.

With previous releases seemingly polarized within their own genres of black metal, noise, drone, and krautrock-y doom metal, Half Blood shows itself as Horseback's most ambitious release, combining just about every previously recorded angle Horseback has taken. Jenks Miller's incredible fusion of all these styles into an accessible, easy-to-digest release like Half Blood is the sign of both a fantastic and well-studied musician. Half Blood's focused-yet-expansive scope will undoubtedly find its way onto many a "Best of 2012" list. Available for pre-order now from Relapse Records. Don't miss out on one of the best albums 2012 has to offer.

-Jon
Posted by The Inarguable at 2:15 PM