Tukaaria and Odz Manouk are both part of Southern California's black metal collective the Twilight Black Circle, which also includes Ashdautus, Volahn, Arizmenda, Kallathon, Blue Hummingbird on the Left, Absum, and a host of others.  Centered around the now defunct Klaxon label (helmed by Bone Awl) and the currently operational Crepusculo Negro, the Twilight Black Circle takes its inspiration and a goodly part of its aestheticism from France's Les Legions Noire, the infamous black metal collective consisting of Vlad Tepes, Mutiilation, Torgeist, Belketre, Brenoritvrezorkre, etc.  The TBC releases are severely limited (though often repressed), difficult to come by, and represent some of the more obscure black metal currently manifesting in the US scene.  Profound Lore has embarked on what is hopefully a thorough reissue campaign of the TBC material, in lovingly remastered and repackaged editions.  "Raw to the Rapine" and "Odz Manouk" are the first two records to receive this deluxe treatment, and serve as a fine introduction to the TBC's archaic and mystical black metal art. 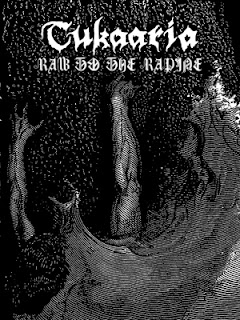 I.  RAW TO THE RAPINE

"Raw to the Rapine" is a compilation of the titular six-song full length originally released on Rhinocervs along with material from split releases with Volahn and Odz Manouk.  Though the recording quality differs between the three (all the material here boasts a fantastic remaster by Colin Marston), the overall sound is completely individualized as defined by the Twilight Black Circle template.  Dissonance and oblique melodicism are in abundance across "Raw to the Rapine," a crushing onslaught of anti-cosmic black metal usurpuration that absolutely shreds.  Guitars are bathed in reverb (much like Volahn), giving the multiple lead lines a scathing sort of presence in the mix, furiously tumbling along with the frenzied battery of muffled drums.  The vocals are varied: sometimes a frustrated, yearning howl from the void, sometimes a grunting bark closer to the coughing extremism of death metal, sometimes clean and deadpan.  These variances create a weird distance and disturbance alongside the equally angular music; the chaos seems controlled but willing to come unhinged at any moment.  Tukaaria obviously grasp the ideology of intensity and harness it to hammering effect across these twelve tracks, and the subtle differences in approach across them render the record almost psychedelic in its expanse.

While the album at first comes across as raw and borderline improvisational, multiple listenings reveal how intricately structured and conceptualized the material truly is.  The shrapnel discordance of "Origins" gives way to the beautifully obtuse melody of "Prehistoric Silence," referencing both the primal aggression of Darkthrone as well as the harmonic complexity of early Mutiilation.  "Mythology" and "Memories of an Extinct Race" both delve deep into the romantic diffusion and foggy yearning found in the Les Legions Noire material while embracing a caustic sort of avant-ism that I can only think of as "garage progressive."  Some of the riffs found throughout "Raw to the Rapine" are brilliant, exploring areas modern and classical black metal both have left in the darkness.  There's a mathematical quality to Tukaaria's structures that bears an affinity with bands like Woburn House and Klabautamann; the weird twists and deviations from black metal "normalcy" constitute a distinctly different take on the usually unbridled violence existing at the genre's core.  Not to say Tukaaria aren't violent, because they most certainly are-just that the slight detours found in their compositions seem bolder and more forward-thinking than many of their contemporaries'.  This is black metal operating at a higher level of intellectualization than the standard, at work with different principles and obsessions.  Like Volahn, Tukaaria a band are reaching for the hidden and mystic components buried in the architecture of the black metal elitism, a search that unearths treasures both dark and seductive. 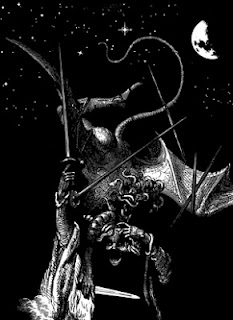 If anything, Odz Manouk represent an even higher level of intensity throughout their material; if Tukaaria were the anti-cosmic, pro-mystical side of the coin, then Odz Manouk are the purely cosmic, near Orthodox interpretation of magickal devotion.  Odz Manouk don't traffic in the willful abstractionism that Tukaaria do, instead choosing to embrace a much more classically-rooted approach to black metal aestheticism that falls somewhere between mid-era Deathspell Omega and the modern classicist approach of Ondskapt or S.V.E.S.T.  The rawness is still omnipresent but harnessed in service to added intensity as opposed to instrumental tonalities.  Melodies seems more familiar but still slightly misdirectional; the progressive leanings that permeate other bands in the TBC are virtually absent here, with Odz Manouk choosing to manifest their difficulty in the form of simplistic but flattening rock and roll riffs like those found in the amazing "The Indisciplinarian."  This is black metal at its most explosive, drenched in chokingly reverbed amounts of fuzz and drums.  The whole record is awash in the occultish, pro-Satanic atmosphere that defined the earliest Les Legions Noire recordings, as well as the bitterly gnostic ideology of Ofermod and the shamanistic ritualism of Arckanum.

"Odz Manouk" is one the finest black metal recordings I've heard in years.  Every song is a superlative example of what really defines black metal, whether it's the anti-religious fervor, the antisocialistic rebellionism, or the inherent violence and cathartic nature of speed and aggression.  "I Will Crush to Marrow this Crow of Ill" features gorgeous, ultra-melodic arpeggiated guitars chiming away beneath a gurgle of choking, dirt-soaked vocals, bringing to mind the best work of Leviathan.  Odz Manouk are more than adept at establishing an aura of psychedelicia within their black metal template: just listen to the awesome, bizarre opening of "The Roaming," as well as the vaguely dissonant and extremely catchy riff that closes it out and you'll hear a band capable of blending a multitude of influences into a coherent, supremely well-crafted whole.  The composition across "Odz Manouk" is nothing short of masterful; even though this material too is compiled from different recordings, it all flows as one incredible piece of black metal art.  There is a distinct and true identity here, bearing the marks of the best of the California scene (Leviathan, Draugar, Xasthur, Crebain, etc.) married to the Norma Evangelium Diaboli aesthetic.  Listening to this reminds me of how amazed I felt upon first hearing "Verrater"; the sort of revelatory power Odz Manouk wields is nothing to be trifled with.  Theirs is the rare combination of beauty, discordance, terror, and extremity that marks immortal black metal recordings.

Profound Lore has done an incredible service to the black metal community by reissuing these albums.  Both are nothing short of incredible, with the Odz Manouk compilation rising to the level of definitive.  It's nice to see the label taking up the black metal mantle again after a relentless onslaught of doom and death metal, and I sincerely hope they continue the series they've begun (the packaging on these is really nice: minimal A5s with some truly surreal artwork in each that only heightens the disconnect displayed in each release.)  The Twilight Black Circle is one of the more interesting black metal collectives currently in operation, and their output deserves a wider reach.  While they fall short of the true romantic and vampiric severity of the actual Les Legions Noires, they are carving out a very particular sound within the black metal universe, further establishing the US as a competitive birthing ground for the genre.  There's very little that sounds like this, and these two records are a high mark for USBM in general.