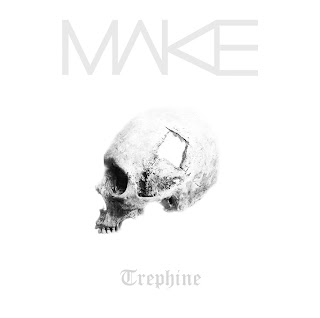 [4] If you really, really like post-metal, nothing here (or anywhere, really) will persuade or dissuade you from adoring Make's debut LP. Purchase this album when it's released and remember to get incense sticks at the store for your handmade Aaron Turner shrine.

[5] From the chapels and hills of...Chapel Hill comes a band ready to unleash the sound and the fury of post-metal upon the legions and legions of wild, crazy and possibly drunk fans all across the globe. Hyperbole aside, North Carolina band Make has already made waves with Trephine, their debut LP.

Band guitarist and songwriter Scott Endres (who played on Horseback's acclaimed album The Invisible Mountain) crafts a concept album about a hospital patient slowly losing their grip on reality and regressing (or progressing) into the realms of the fantastical. There have been concept albums regarding descents into madness and the likebefore, of course; but not many quite capture the despair of it as effectively as Trephine does. Reverb, tremelo and a slow-tempo can capture a dark mood or emotion when deployed as well as any array of techniques, and to his credit Endres makes (no pun at ALL) it happen with gusto.

However, the problem with Make here is not technical skill, songwriting or production levels. The real culprit here is that Trephine is too post-metal, in the sense that it is too firmly entrenched in the mire of its genre to really be worthy of particular note. Truth be told, it's not totally Make's fault: their debut Trephine is just that – a debut LP. Here there's plenty of distorted prose, driving tremelo, crushing riffage, and entrancing, enchanting drums and bass to enrapture the listener in a vicarious experience of its concept. That's great, if you can dig the feeling of being suffocates over layers of feedback and swallowed by tidal waves of melancholy. However, there's nothing here that hasn't been done before by other, ultimately better bands (Isis, Neurosis, Pelican and the usual list of suspects). As a result, anyone familiar with these bands and hasn't fallen in love with them will ultimately yawn at the slow, sludgy riffs of “Ancient Tongues,” the ham-fisted drums of “Returning To The Ruins of My Birthplace” and the mourning, sorrowful closer “Into The Falling Grey,” which flows well with the theme (presumably death) but also drags on for far too long.

In fairness, there are some nice moments on the album; “After The Dust Settles” both captures a feeling of loneliness and doesn't overstay its welcome, “Valhalla” combines doomy riffs with a psychedelic bent to create something worthy of repeat play and the uplifting sense of streams of light piercing the dark in “Rotting Palace” all indicate that Make has some excellent potential. However, for now, we'll have to make do with what Trephine is – a standard-press post-metal album.

[6] You need to go here, as tradition dictates.

(Trephine will be available July 30 through Devouter Records. Click here to stream the album.)