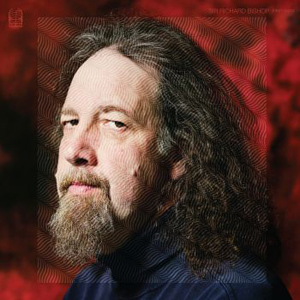 Vinyl issue of a small-press CDr originally released by Bishop himself, now given a deluxe treatment by Stephen O'Malley's Ideologic Organ imprint (which has been slowly amassing a pretty amazing discography) with a typically gorgeous rework of the art alongside the obvious benefit of some seriously amplified visibility.  Bishop enjoys a reputation amongst guitar fetishists (myself included) as an incendiary, almost otherwordly player capable of summoning up bizarre runs related to exotic scales from Eastern cultures as well as horrendous torrents of skronking jazz-infected discordance bordering on wankery; while his exhaustive back catalogue as a member of the Sun City Girls speaks volumes to Bishop's far-reaching pool of influences and interests, his solo records distill it all down into swathes of sound that are as beautiful as they are unsettling and unfamiliar, taking the guitar into the very borderlands of transcendence and immersing his listeners in a hazy world of opium crashes and buzzing, sweaty drone.

Intermezzo ranks as one of the best of these explorations, a whirlwind tour through Bishop's map of the world that touches on pretty much everything he does well without resulting to overwrought indulgence in form or gaudy and unnecessary showmanship.  This is simply a record for guitarists by a guitarist, and it's unequivocally lovely.  Each of the album's tracks has a distinct sound and inhabits a very individualized space, and while taken as a whole the record does cohere (pretty much as a smorgasbord of Bishop's mastery of the classical modes of the East) I think it's better viewed in the same manner of his glorious solo record for John Fahey's Revenant label, 1998's masterful Salvador Kali.  Like that album, Intermezzo displays a remarkable talent for a variety of styles, all of which Bishop is able to fuse to his vaguely drugged-out and sand-blasted musical worldview.  "Dust and Spurs" and "Reversionary Tactics" are pure Takoma style fingerbusters, hovering in a vaguely melodic blur of revisionist approaches to Americana.  "Dance of the Cedars" is a veritable teleportation machine dumping you straight in the center of a Middle Eastern bazaar, all hyper, frenzied plucking undercut by a sense of the sinister and lurid.  "Inner Redoubt" shows Bishop engaging in a 14 minute meditation on the divine as evoked through cascading figures of Basho-esque contortions, composition becoming a very focused exercise in maximalist minimalism that almost seems a reincarnation of Salvador Dali's "Al-Darazi."  Here too Bishop turns the merely languid into an incredibly focused piece, working towards an extremely specific vision of patience and cosmic evolution.  "Hump Tulip" brings us back to earth with a playfulness and tastefulness that demonstrates Bishop's grace as player; the guitar work here reminds me of Jerry Garcia, smooth and precise, strikingly clean.  "Dhumavati" and "Molasses" are both gentle, with one working in tones of pure menace and dread while the other floats off on a soothing hybridization of lounge music and the bitter cynicism of Mark Knopfler's riffing on early Dire Straits records.  "Cranial Tap" is the record's real mindfuck, though, something approaching the belligerence of HNW recordings as made manifest in the unaffected acoustic guitar.  Bishop whips up a flurry of twinkling discordance and moulds it into a physical trance, an engrossing work that shouldn't be so simply by merit of its own willful and obstinate tunelessness.  That aesthetic was part of what was so engaging about Bishop's work in SCG and manifests itself here wonderfully, creating in "Cranial Tap" something both antagonistic and magnetic.  Intermezzo closes with the buzzing and relaxing serenity of "Khajuraho," a soothing trip out of Bishop's brain-melting audio massage architecture.

Bishop is one my favorite guitarists; his vision and execution are intertwined flawlessly, and he just makes incredibly beautiful music.  It's transformative and transportative, capable of taking the listener deep into their own head or simply through the various exoticas of our world via audial evocation.  These are educated compositions without being preachy; they invite you to come and see the sights with them rather than berate you for not having been there already.  Bishop's day job as a seller of rare and esoteric books surely puts him in touch with information not normally available outside of a certain circle; combined with his re-imagining of classical Eastern modes, he creates self-contained musical worlds that defy reality and exist comfortably as spectres of guitar-styles past.  His guitar work is simply not to be missed for anyone interested in six-string hallucination or unrestrained demonstrations of ability-somewhere in Bishop's sound is the meeting place between Buckethead and Basho with more of a mystical zone-out vibe-but also for anyone else interested in uncomplicated yet involved music that rewards patience and concentration.  Intermezzo commands a place of prominence amongst the renewed interest in modern revisionist guitarist records, placing Rick Bishop firmly in the forefront.  Great, intoxicating instrumentals for conjured desert auroras.  Drift off.

-Cory
Posted by The Inarguable at 6:55 PM