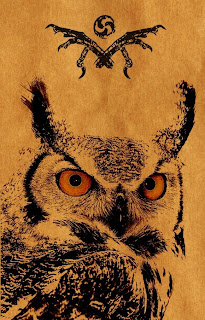 It's a little strange to discuss a neofolk album in an unfamiliar tongue. Fortunately, Sangre de Muerdago happen to be a group of not only talented but skilled musicians. Think of Neun Welten and In Gowan Ring: intricate melodies and constant motion. Now take a touch of Portugal, but remember primarily that Sangre de Muerdagos are a group of loving friends, not an occult loner or two (hail the occult loners). Sangre de Muerdago's Brave Mysteries tape, inside and out, is voices of joy reveling in the group life that is harmony and freedom beyond what most even see in our contemporary concrete age.

I hardly know what Portugal is like, but California's wilderness is the perfect place for this type of music; not only the straight-treed forest, but the shining sun and the wild breadth of the west coast. Sangre de Muerdago lived in what Brave Mysteries describes as a "traveling caravan" in California while recording this cassette, and it reeks of woodsmoke and the never-ending new wonder and life of long roads and fraternal/sororal love.

I'm fairly certain some of those reading this are attending Stella Natura this September; you and I both know that the musicians filling that air are some of the best you could ask for. If Sangre de Muerdago is new to you, take warning that you'll be taking some of their music home. For those of us who are merely wishing we could attend, I strongly recommend picking up this cassette for a glimpse at what we're missing.

In the meantime, leave your computer behind for a bit. ". . . run through the woods, jump the gap get wet . . ." and give Sangre de Muerdago the respect of living life.