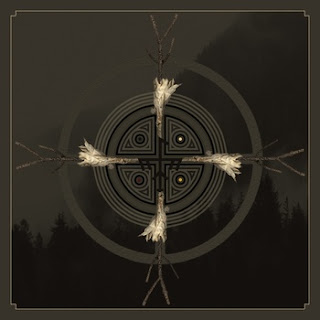 It has been a long, hot Summer, so miserably dry that even the slightest misting from above is celebrated. The grass is scorched, the trees are dying, the crops won't grow...frankly, it sucks. With the change in seasons just around the corner (just a little over a month away, now), one can only hope that the falling leaves of Autumn bring whatever life it can back to the ground before it's covered with snow for however long Chicago thinks it is necessary. Though the Midwestern heatwave hasn't affected Northwestern woodland denizen Chet W. Scott, the return of his normally doom metal-oriented project Blood of the Black Owl seems to be the perfect catalyst to bring about Autumn's onset with his latest effort, Light the Fires!

Having digested the surprise Blood of the Black Owl split with Scott's bandmate in The Elemental Chrysalis's, one James Woodhead, project At the Head of the Woods, I wasn't really sure about the future releases of Blood of the Black Owl. With the "demise" of his main project, Ruhr Hunter, during Blood of the Black Owl's supposed extended hiatus, it seems that Scott merely merged the two projects together, resulting in the twenty-five minutes of deep, ritual-based ambient which was Scott's half of the Handmade Birds split. Beginning with a lengthy invocation around the Laguz rune in the opening track "Caller of Spirits", it became fully apparent that Light the Fires! is Scott fully revealing a new face to his Blood of the Black Owl project.

To those of you who were used to Blood of the Black Owl's existence as a metal project, like I was, the first listen of the almost entirely non-metal Light the Fires! will prove to be a difficult one. Aside from the odd-man out doom metal track "Sundrojan" and the gradual build to metal in "Soil Magicians," Scott foregoes the project's usual soulcrushing, distorted doom and moosecall vocals for calming, 70s progressive rock-influenced folk. Yes, this stylistic break is odd, seeing as Blood of the Black Owl has been a meditation in massive, tree-smashing doom since the days of Svart Ugle almost seven years ago, yet Scott's trademark, Shamanic forest worship is still the centerpiece of the project, which, in the end, was the sole reason why he founded this project in the first place. Utilizing intriguing guitar counterpoint, a variety of flute-range woodwinds, autoharp, drums, and perhaps the most intricate basswork seen in any of Chet Scott's projects, Light the Fires! is the perfect soundtrack to forest montages: meditative, solemn, and with a sense of isolationism which can only come from living among the trees without any human contact.

Though most of the album has a wonderful flow, with tracks leading into one another and a thematic scope which ties it together, I can't help but feel that "Sundrojan" was put in haphazardly. That's not to say that it isn't a good track, as it would have fit on the first two albums nicely, but putting a full-on doom metal track in the middle of a modern almost-neofolk album like this just seems reckless. I'm not saying that this track doesn't fit in the scope of the album overall, as highlighted by the massive doom metal climax of "Soil Magicians," it's just that there's no buildup or herald to the stylistic change within the album in "Sundrojan" like there was within the tasteful buildup and cohesive fusion in "Soil Magicians" and "Disgust and the Horrible Realization of Apathy." "Sundrojan" might be the lame duck of Light the Fires!, but, since it still is of the same caliber of previous releases, I still find myself enjoying the track all the same.

The near-80-minute length might be intimidating on paper, but Light the Fires!'s hypnotic gait proves it to be enjoyable, however long it is. However different it might be, I'd like to think this newer direction, which still respectfully hints at the past, is a successful one. Though a pre-order has not been announced just yet, Marty of Bindrune Recordings has graciously made it available to stream for free from the Bindrune Bandcamp. Another successful chapter in Chet W. Scott's musical career. Now, how about a new Elemental Chrysalis album?