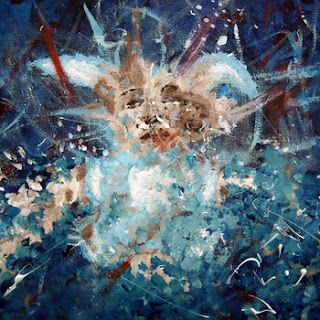 I'll freely admit, I haven't really kept up on Sutcliffe Jugend's output. My initial exposure was mp3 versions of the "We Spit on Their Graves" 10-cassette box (which you can buy on Amazon, as strange as that is), and I never really felt the need for more. Ten cassettes worth of destructive harsh noise is more than I'll ever hear from most performers, and it was damned good stuff

Somewhere in the intervening 30 years, though, Tomkins/Taylor transitioned from destroying anything Whitehouse did to something I wouldn't put past a modern electroacoustic composer who happened also to be a torture killer on the side.

I made a horrible mistake when I opened the digipack. I did not simply take the CD out and put it on. Nooo. I chose to read the lovely little short story printed inside; the text of the title track. It's a children's story, for parents who want to come home to the self-mutilated corpses of their children. Tomkins tells the story calmly, his voice wrapped in unsettling shifting synthesized drones.

Each, ah, song on Sutcliffe Jugend's new record is a distinct play on this approach; instead of traditional angry, harsh power electronics, each is a work of unease, dread, and horror. I give the artists full credit for managing to make concrete and recorded the feeling of the worst nightmares, but the stories here are not for humans with a desire to function. I have to shut off memories of this album when I'm not listening to it, and I forget the stories the same way I do nightmares. Not pleasant.

Posted by The Inarguable at 4:57 PM