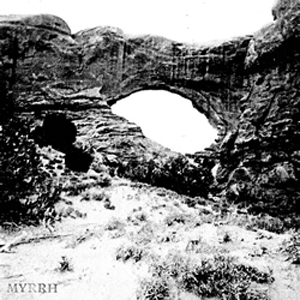 Vinyl reissue of the long gone debut tape from Minneapolis psych-droners Myrrh, here given a necessary remaster and an improved layout from Minneapolis label Soft Abuse.  This recording showcases the more obscure side of the Twin Cities music scene, and alongside Taiga, Soft Abuse is one of the finer suppliers of outre and brain-melting sounds our musical community offers.  Having recently played a show with Myrrh, I can attest to their incredibly crushing, dense, and narcoleptic soundscaping, and this LP release is a much-needed wider introduction to a band who deserve critical and popular appreciation beyond the sometimes narrow scope of Minneapolis ears.  Harnessing the awesome drone theatrics of Earth and melding them to the lobe-scraping expanse of vintage psychonauts like Trad, Gras, Och Stenar and Amon Duul, Myrrh simply force open the third eye by way of their mesmerizing viola/drum excursions into the great nothingness, creating fire out of sludge and carrying it down the mountain for the good of all.

For a duo, Myrrh froth up an astounding amount of sonic destructionism.  The viola's capabilities as a drone/pyschedelic instrument are on full display throughout, with Jackie Beckey's playing becoming something almost ritualistic across the record's stretch.  Giant bowed lines collapse in on themselves and transform into scathing squalls of screaming feedback, transmissions from an ancient cosmos beamed into the listener's linearity via intense distortions and significant amounts of delays and self-samplings.  Appreciators of Bardo Pond's more modern work will find many similarities to Myrrh's approach as well as much to fall in love with; what the Philadelphia sludge-lords do with five members Myrrh easily achieve with only two.  Having seen both units live, I can honestly say this comparison is without hyperbole (although to be fair, the incarnation of Myrrh that I saw included a third member on lap steel guitar, and the volume was staggering); the focused intensity in Myrrh's approach elevates their compositions to an almost theatrical level of transcendent splendour, a resounding call to break down the walls of reality and throw oneself full into the truly astral.  Like Bardo Pond, Myrrh seem to embrace a level of awakened sense through various organic means; the lazy quality of the music bemoans inner transformation and altered awarenesses.  Free float and abandon consciousness and you shall be rewarded; the tethers connecting one to the corporeal are tenuous and translucent at best, utterly transparent and begging to be forgotten.  Myrrh achieve that spaciness without any sort of pretense: their music simply exists in the moment, void of concern for the physicality around them.

But the physical is not forsaken.  Myrrh occupy an immense amount of sonic ground; all of the feedback and sky-tearing whine is anchored by an obstinate and relentlessly simplistic drum performance by Andie Mazorol (of local psych-agitators Mother Of Fire) that thunders down on the head like a wet mattress dropped from a skyscraper.  There's no flash or showiness present in Mazorol's playing, just a deep understanding of the constant that hearkens back to the glory days of head-nodding, fried out krautrock and wasted psychedelia.  The drums lock in to the "riffs" in the most conjoined way; the two instruments interact and feed off of each other constantly, creating an unshakable aura of unity that opens the door to a parade of flashing lights and towering visuals.  I'm astounded that Myrrh sound as murkily thick as they do; volume like this necessitates a certain drowned out sound, and the deep reverberations are as much of "Earth 2" as they are Neu!.  This is music that will lull you, stoke the simmering inner fires of consciousness and then shoot you into the coldest reaches of outer space.  Endless black and pulsing scathes of brittle stars stratifying themselves, altered states and heightened senses reaching into the great infinity to bring back a relic from outside the known.  Myrrh serve as transport, as a vehicle for moving beyond the known and getting into the oft-indefinable sense of the self.

This is the sort of record that makes me happy to be part of the Twin Cities community.  Too often we're tied to an enormous amount of mediocre bullshit and too often our local rags perpetuate that mediocrity with continued (and seemingly endless) coverage of the same ten or so musicians doing the same three things they've always collectively done (I won't name names, but just take a tour through the cover stories of the City Pages, or even worse, the yearly "Picked to Click" awards, to see the familiar faces I'm referencing), and there's no room or appreciation for innovation and "outside the sphere of commonality" influences.  Groups like Myrrh help dispel the idea of Minneapolis as singer/songwriter territory and make a case for us as a birthplace for some seriously damaged, wasted, hypnotic, and uncompromising slacker-drone squalor.  The LP version of "Myrrh" is available now through Soft Abuse; order a copy and watch reality recede into a hazed out blur of melting brain waves and throbbing bass nodules.  While you're there pick up some of the great shit they've released from the might Steven R. Smith under his "rock" guises, Ulaan Khol and Ulaan Markhor as well as the vaguely ancient and hermetic traditionalisms of his wonderful Hala Strana project.  You'll pretty much wash yourself away in a cloud of dripping psychedelic ethereality.  One of Minneapolis' finest bands, on one of our finest labels.