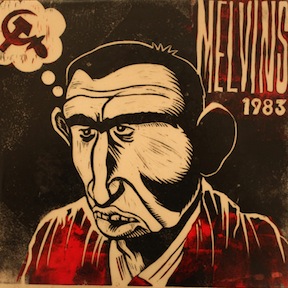 Latest hyper-limited release from the increasingly prolific Melvins, this time featuring the original 1983 lineup of King Buzzo on guitar and vocals, Dale Crover on bass and drummer Mike Dillard, hence the title of the EP.  Hearkening back to a time when the Melvins were a fairly straightforward (albeit still slightly warped) hardcore punk band, "1983" shows the trio at their regressive best, slaying their way through two originals that recall the era and two obscure covers that offer a glimpse into some of their formative influences.  While previous attempts have been made by the band to mine the riches of their past (most notably the "Mangled Demos from 1983" collection put released on Ipecac a few years back, but also a few stray live releases) none have done so quite as successfully as "1983," making this a quasi-essential Melvins document for those interested in the history of sludge-metal's most multiphasic and multifaceted band.

Whereas the "Mangled Demos" showcased a young group utterly caught up in the throes of a "loudfastrules" mentality that effectively quashed what would make them so unique, the two original tracks on "1983" manage to bridge the gap between the slaughterhouse approach to hardcore the Melvins had mastered and the deceptively simplistic and recidivist co-opting of standard rock form they would later lay waste to on classic records like "Houdini" and "Stoner Witch."  The template here seems to be "Set Me Straight," a song that has existed in the Melvins' live arsenal almost as long as they've been a band (it appeared on both the "Mangled Demos" and "Houdini") and a virtually perfect amalgamation of tar-belching, barbaric heaviness married to melodic pop reinvention.  The Melvins haven't returned to this sound for awhile; while the latest albums have definitely seen Buzzo embracing his classic rock tendencies, he's buried them underneath a torrent of dizzyingly complex structures and patterns, eschewing any sort of "catchiness" the songs might inherently possess.  Both "Psycho-delic Haze" and "Stump Farmer" allow the hooks to come forth unabashedly, with the former lurching along at a grinding, unchanging pace and the latter regressing into the awesome start/stop metallicizing Buzzo is so fucking good at.  Listening to these two tracks is like drowning in some beautiful, tepid, gorgeously brutal nostalgiah, the closest the Melvins have come to repeating the formulas laid out in their masterful mid-90's output.

The two covers here adhere to the style of the originals.  "Stick'em Up Bitch" is a rework of the Pot O'Pies' near krautrocking "Fascists Eat Donuts," a droning one chord chunk-a-thon that is as mesmerizing as it is anthemic, recalling similar forays into "zone-out" psychedelia the Melvins have toyed with on "Youth Of America" and "The Lighter Side of Global Terrorism (Extended Space-Melt Version)".  While certainly an arcane choice, the song meshes well with the original work, shedding light on some of the intent behind the EP.  "Walter's Lips" is a far more obvious sort of assault, a Ramones-esque blast of pop-punk majesty from The Lewd that allows the Melvins to whip themselves into a sunshine and rainbows type frenzy without it being seen as "weird" or atypical (although at this point the Melvins move in so many musical directions they've pretty much demolished any idea of atypicality that might affix itself to them.)  Much like the covers they did for the "Hostile Ambient Takeover" series of seven inches, "Walter's Lips" lets the Melvins cut loose on the sort of song they aren't normally associated with but can absolutely shred on and also illuminates a side of Buzzo's influences that isn't normally brought to the fore.

"1983" is easily one of the most enjoyable recent Melvins offerings, satisfying both my joy of seeing them in trio format and their revisititation of a style they've seemingly left behind.  While Dillard is not the drummer Crover is (and no one ever will be, in my opinion) he serves these songs well, giving them the necessary drive and pulse that carry them into head-nodding brain-obliteration territory.  Buzzo is in fine form as always, spewing out slurching distortion and his standard space-warped vocal histrionics as well as playing an awesome solo on "Walter's Lips."  It's the sound of a band having a shit ton of fun looking into the mirror of their past and pulling something vaguely reminiscent but ultimately new out of it.  As much as I've been non-plussed by the latest full-lengths, the Melvins are still one of my very favorite bands, and an awesome reminder of what can be accomplished by remaining true to your own specific vision and not taking shit from anyone.  In the art book they published a few years back, the frontis page had an inscription reading "Melvins say FUCK YOU."  "1983" reminds me of why the Melvins are one of the few bands who can truly say it.  Great stuff.  Supposedly this EP will be available on the current tour, but like most of the stuff the Melvins do with AmRep, it'll disappear almost immediately.  If you want to get a copy, get to the show early.