Cryptopsy's new eponymous album (am I the only one who thinks that's an odd choice for a seventh album?) is hitting me a bit like "Once Was Not"--for the most part, the music is good enough for me to put up with the damned vocals. 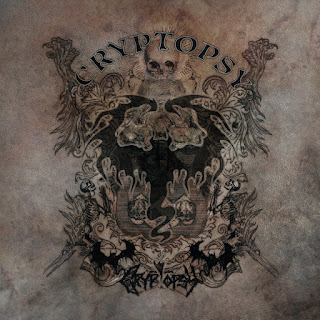 Jon Levasseur is back. Cryptopsy's self-titled record, thank God, actually sounds a bit like Cryptopsy, for the first time in twelve years. And Matt McGachy honestly isn't as annoying as he was on the last album; this effected "guttural" deathcore style is less awful than the straightforward metalcore screaming he threw all over the album whose name shall remain unspoken. Christian Donaldson is, however, still in the band, and he's still the guitarist from Mythosis.

This is what "Cryptopsy" is: it's Cryptopsy with a deathcore singer (why) and a second guitarist with nothing resembling taste (why). It's chock full of great examples of the riffs that made Cryptopsy something special and important in the first place. If you own any deathcore albums; if you call Job for a Cowboy a "death metal band;" get this, because it's pretty glorious at that level. You'll be disappointed that there are only maybe two breakdowns on the whole album.

If you loved Cryptopsy 5 years ago, give it a shot. You'll be glad it's not that other album, and those trem-picked 7/8 angular melodies will make you smile.

If this were a debut album, I'd never listen to the band or buy any of their work.

Posted by The Inarguable at 9:18 PM