Sounds Of Autumn II: Kinit Her (Song Premiere!) and Wreathes

Ah yes, Friday means it's time for the second installment of my short-run, weekly column thing about Autumnal music. This week takes us to the faraway land of Madison, WI, where musicians Nathaniel Ritter and Troy Schafer (since relocated to Chicago) create some of the most compelling neofolk the world has to offer as the two sister projects Wreathes and Kinit Her.

Check after the jump for TWO reviews and our first SONG PREMIERE!

Every once in a while the world is given a collection of songs which completely changes the nature of the style in which those songs reside. Something which throws so many curve balls and is such a massive display of ingenuity that it leaves the listener with his or her mouth agape at the sheer power and sway something as intangible as sound can hold. Madison folk duo Nathaniel Ritter and Troy Schafer have been crafting music under the Kinit Her name for quite some time now, slowly honing their abilities and expanding their horizons with each new release. With Storm of Radiance, Kinit Her's latest full-length effort since last year's Gratitudes (Small Doses), we truly see Kinit Her come into their own, breaking down boundaries and setting new heights for the neofolk genre, resulting in one of the most impressive albums I've heard all year.

Having established themselves on the more experimental side of neofolk, releases like Divine Names and As Magi displayed almost a strictly dichotomous approach to Kinit Her, resulting in compositions existing in either the song-oriented or sound/texture-oriented categories. That isn't to say this approach didn't work for Ritter and Schafer, as both sound categories were equally enjoyable, but it did also give an air of inconsistency or a lack of cohesion within the project. I suppose I never really thought about it before hearing this album, Storm of Radiance is Kinit Her's first foray into an equal, simultaneous mix of sound exploration and neo-Medieval neofolk, which made me wonder why they hadn't mixed the two in the first place! The intricate nature of Schafer and Ritter's immense knowledge of experimental music, both in a modern and scholarly fashion, acts as much as a background layer of ambiance as it does an enthralling source of wonder. An organic display of beautifully rendered samples, unusual instrument techniques (check out the strummed violin Heathen Harvest's premiere of title track "The Storm of Radiance" as a reference point), and extended, at times creepily harsh, vocal techniques, Storm of Radiance's experimental flair is both fitting and filling as it is sophisticated and carefully crafted.

Aside from its experimental side, Storm of Radiance shows some of Kinit Her's best and most moving songwriting. Multi-instrumentalist Troy Schafer's unique approach to guitar polyphony and virtuoso violin display takes the forefront here, trading emotionally jarring melodies with an ease which can only come from someone who has passionately studied music. Ritter's delicate piano, keyboards, and horn samples echo with a profundity and immediacy which immediately grabs the listener, but in the same way French impressionist Erik Satie's exercises in extreme quiet take a hold of any audience's heart strings; the space and atmosphere between the notes is what makes Ritter's performance so powerful. Between the two we find perfect harmony in individual style, no doubt a result of endless collaboration between the many projects in which they appeared together (Wormsblood, Burial Hex, Wreathes, Compass Hour, et cetera), as well as a deep devotion to their own project both in sound and meaning.

So there you have it. I've essentially been listening to this album nonstop for the past three or so months and I still can't quite gather all my thoughts on it. This is not only one of the best albums I've heard all year, but also one of the most unique and memorable listens I've ever had the pleasure of experiencing. This is a triumph; a new bar of excellence has been set. 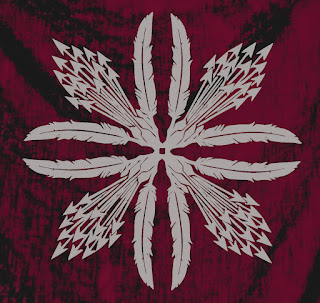 It's funny, one wouldn't think Ritter and Schafer would have it in them to make any more music for a while after the ridiculous bar they set for themselves with Storm of Radiance, and yet here I am reviewing yet another album starring these two key players in the new American neofolk scene. Sister project to the experimental Kinit Her, Wreathes focuses more on the song qualities of folk music and folk rock, at times bordering on near pop execution. After a very successful (read as: sold out) 7" on Bathetic Records released later last year, Wreathes returned in May of this year with a most excellent 12" record on Pesanta Urfolk.

I've never really heard an album quite like Wreathes's self-titled album, let alone a band quite like Wreathes. Drawing from intriguing, contrapuntal guitar and bass lines, big (BIG) voices, and an almost rock-like gait, Wreathes definitely sets themselves apart from the rest of the neofolk scene, instead imbuing themselves with the tag "Perennialist Pop." "Pop" is right, as this album is filled to the brim with memorable melodies, distinct hooks, and much more straightforward structure than seen other Ritter and Schafer projects. Driving rhythms push these songs forward in a driving, almost militaristic fashion, only furthered by repeating, extremely rhythmic vocal motifs. Everything is grandiose in nature: the indulgence of extremely resonant voices, seemingly infinite layers of guitar, bass, violin, voice, keyboards, and percussion, and a consistent recurring of each song's most memorable "chorus." Altogether, Wreathes has manifested itself as a very different beast from its older sibling, yet it still holds a similar power which is a constant in both Ritter and Schafer's various musical endeavors.

Since the Pesanta vinyl edition of this album is out, I'd like to take a moment to talk about this release's gorgeous packaging. I grabbed one of the special "Bone" editions, complete with splatter vinyl, an amazing gatefold sleeve (with paisley-style printing on the inside pocket!), and shiny, metallic spot printing on both front and rear covers. Labelhead Adam Toruella pulled out all the stops for this release, consistent with the high standard he has set for himself with previous Pesanta releases, and it only adds to the wonderful experience overall I've had with this album. If analog isn't your thing, Brave Mysteries just released an equally as awesome CD edition.