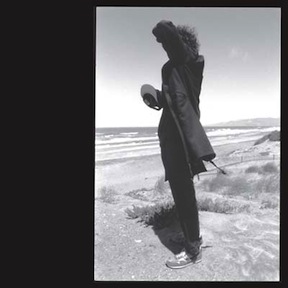 Crucial reissue of Alvarius B's exhaustive self-titled double album effort from 1998, a dirging tour through the black and white slums of psychic oblivion by way of severely damaged folk approaches and insane, hallucinogenic poetry.  This is for the most part some heavily atonal acoustic skronk, designed to ward off listeners as much as draw them in; your impressions will likely be closely related to your willingness to succumb to the freaky intimacy this record offers up.  Imagine Jandek in a knife fight with Allen Ginsberg and you'll get close to the sounds on display here.  Throw in a little dose of altered consciousness and you'll be more than ready to receive Alvarius B's warped transmissions.

Alvarius B is one of several alter-egos of the Sun City Girls' Alan Bishop; that Alvarius B's recordings are by far the most accessible of these multiple identities speaks volumes about where Alan comes from as opposed to his brother Rick.  Both brothers wield guitars, but where Rick is grace and technique, Alan is immediate primacy and primitive aggression.  The first Alvarius B record was an entirely instrumental affair showcasing Alan's incredibly physical and damaging approach to the guitar; here he embraces the full gamut of his twisted, wicked intellect and sets off on a personal excursion to the heart of the weird, with the guitar merely serving as a vehicle of transport (for more of Alan as straight poetic shaman, dig on some of his work as Uncle Jim).  Alan's world is populated with angry, deranged, and slightly schizophrenic personalities struggling to co-exist in a world of greys and beiges, a barrier of imagination that imprisons the unhinged visionary and forces them to navigate the banal realms of normalcy.  That the songs grow more and more jagged and formless as the record sprawls onward is an illustration of the growing paranoia and discordance felt by Alvarius B's myriad narrarators; as the music falls apart the lyrics grow more lurid and tripped out.  Witness this excerpt from "The Great Fuck Inaccessible":  Ring master Miami bought her a nice pair of jammys & planned to take her to the tiger cages/and split her like a pumpkin and all the fez-totin' fellas with smiles thick and yellow hovered near all the exits with their hands in their britches/they knew women as witches and females as trouble/all bitch whores the rule with perhaps one exception and they focused their erections.  Alan's world is one gigantic fucked up mess of sleaze, extremity, sweat, and conspiracy-nothing gets better or more hopeful anywhere throughout.  While there are moments of beauty, the overwhelming aura is one of disgust, fecundity, and despair at the world's gross baselessness.  Alvarius B comes off like a wandering preacher showing off a collection of apocalypse stories for the mentally deranged, shedding light on all the dark hidey-holes of a bleak and wretched existence.

If you've ever seen the Sun City Girls live, you know Alan's musical style.  As a bassist and performer he's absolutely monstrous, attacking his instrument with a brutal ferocity that's more physical punishment than any sort of approximation of musicianship.  To me he's always come off as a mixture of Little Steven and Klaus Fluoride, fusing occidental style to hardcore punk's deranged and self-immolating postures.  When I saw him with his brother Rick on the "Brothers Unconnected" tour a few years ago (in honor of their fallen comrade Charles Gocher) it was a far more relaxed affair, with the two performing the typical SCG exotica alongside Alan's Alvarius B material, much of which was culled from this record (a lot of the material that appeared on "Alvarius B" would find its way into the SCG catalogue, both live and recorded, including one of my all time favorite SCG tracks "Cooking with Satan"); the overall effect was one of absolute inclusion, wherein two musicians who have often been sighted as incredibly off-putting to audiences brought everyone in the room into their vision and world and managed to transcend reality for almost three hours.  That same sort of power resides in "Alvarius B."  The first disc is the more "tuneful" of the two, with Alan dripping into some syrupy eastern-sounding guitar lines and string drones that lull almost as much as his sardonic and callous voice: the songs here actually resemble as such, with tracks like the aforementioned "Cooking with Satan" (appearing here with a more acerbic delivery than the full-band SCG version) and "Flying Skillet" even manifesting sing-along potential.  There is a beauty and tenderness hidden beneath Alvarius B's contempt: listen to the gorgeous string play on "Seeing-Eye Latte" or the eerie jungle-river-by-moonlight-and-hallucinogens caterwauling on "CCC" to find the rare instance of wonder and awe Alvarius B can summon.  If the Sun City Girls were the door to the opium den blown open, then Alvarius B is all the violent, breathtaking, and disturbing sights beheld inside.

Like the great poets who work in music before him (Dylan, Cohen, Springsteen, etc.) Alan Bishop creates universes, wholly and fully formed.  He grants us access to a special skewed vision of reality, wavering and distorted, frightening and menacing, transformative and transcendent.  The ultimate power of words fused to song becomes apparent in the hands of a master like Bishop: time slows to a glacial crawl, reality drops away like melting sunset, and the florid stench of the esoteric blights the room.  In his somewhat overwrought liner notes to "Alvarius B," Trey Spruance maintains the record "...leaves us begging for the miraculous kaleidoscopic death blow that once and for all might shatter our universe into the billion glistening multicolored gems we forgot to search for during our ill-spent lives."  Alan Bishop's universe glows like rot, dead stars hanging in the blackened skies, looming over the rancid lives of a million despondent nobodies.  It's a close mirror for the world we're mired in now, floundering, screaming for meaning in the void of modernity that consumes us.  The illusory simplicity of Alvarius B's approach endears it to a rich tradition of singer/songwriters, capable of insinuating itself in a collective consciousness to fester and spread; the actual thematic and musical complexity of the work virtually ensures that no one but a small and rabid following will ever fall under its fetid enchantments.  This was far out shit when it was originally released in 1998, and today it seems as equally and beautifully wasted, a missive from the voids of imagination and an awesome statement from a truly visionary artist.  If this hadn't come out once already, this would be an album of the year contender for me.  Totally essential.