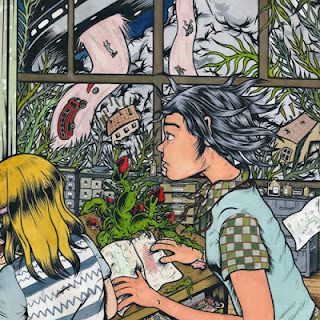 Mehdi Ameziane is truly a gifted musician. As if the abstract folk sound collages of Natural Snow Buildings, Ameziane's main body of work with fellow artist Solange Gularte, isn't sprawling and consistently magnificent in its own right, Ameziane's solo works under the name TwinSisterMoon possess a similar, albeit much more structured, sort of magic. Though my first conscious experience with TwinSisterMoon was only three years ago with the near perfect The Hollow Mountain (Blackest Rainbow/Dull Knife), I was immediately enamored with the music's depth and Ameziane's incredible grasp of sound sculpting through both concrete songwriting and disparate, gorgeous folk-based ambient music. Based in subtlety, TwinSisterMoon's quiet, nostalgic folk soundscapes are not so much songs as they are hazy, snow-covered dreams of childhood.

With Bogyrealm Vessels, we see Ameziane digging himself deeper into the magical rabbit hole he started digging some twelve years ago. Similar to the approach he took on 2010's Then Fell The Ashes..., Bogyrealm Vessels shows a further split between the (relatively) lengthy, glacial ambiance characteristic of Natural Snow Buildings and short, often stark folk vignettes, featuring Ameziane's unique, often mistaken for female, voice, only this time pushing them to their extremes. Whereas the droning ambiance remains similar in sound and stature to Ameziane's previous efforts in this style, it is the folk songs which really caught my attention. Rarely expanding from a solitary guitar and voice, these lo-fi folk excursions act as mini still-lifes, bringing about images of rolling hillsides sparsely dotted with cottages. It's a unique kind of beauty, a lasting beauty that I've found unique to the small handful of projects which Mehdi Ameziane has touched. This is the kind of music which sticks with you.

TwinSisterMoon has done it again - Ameziane's meditation on beauty is one which will remain at a constant peak, with Bogyrealm Vessels only further supporting that claim. With surreal artwork by Natural Snow Buildings member Solange Gularte (which ties in to one of the premiered songs - do your homework!), the dreamy nature of this album is twofold; visually and aurally. This beautifully packaged DVD-sides digipack is available for pre-order now from Handmade Birds. David Eugene Edwards is a force to be reckoned with. From his early, much more experimental work with The Denver Gentlemen all the way to the now-spaceless Wovenhand (formerly Woven Hand), this musical holy man's sound paintings of the land where the Great Plains meets the Rocky Mountains have been a source of inspiration and awe to many. With seven full-length albums under the Woven Hand/Wovenhand name alone, Edwards has covered a vast expanse of ground, not unlike the vast expanse of land his music represents, resulting in a much larger source of identity for his Wovenhand project than most folksters dare to tread.

With an almost entirely new band backing him, The Laughing Stalk shows Edwards stomping forward, deeper into the rockier territory he had claimed as his own after 2006's much more contemplative Mosaic. Reminiscent of later first-era Swans material (The Burning World and so on), The Laughing Stalk is characterized by driving post-punk beats, Johnny Cash-goes-punk guitar muscle, and Edwards's own, unique approach to voice. Perhaps a byproduct of touring with bands like Minsk and Swans frontman Michael Gira, the near-punk rock romp "As Wool" came as a surprise, with a booming, almost aggressive rhythm section. Of course, Edwards managed to make it his own, imbuing his now signature brand of American soul into the non-percussion aspects of the song, resulting in a completely unique musical statement. This is the new outlaw country, and Johnny Cash would be proud.

Though I long for the more contemplative days of Consider the Birds and Mosaic, whose deeply autumnal sounds still resonate with me after many years, I still greatly appreciate the progression David Eugene Edwards has followed with Wovenhand. A unexpected, hypnotizingly heavy effort, The Laughing Stalk (either a biblical reference or a folkified fingerpointing at Mark Hollis) is a strong, concentrated album which is worthy of all praise.