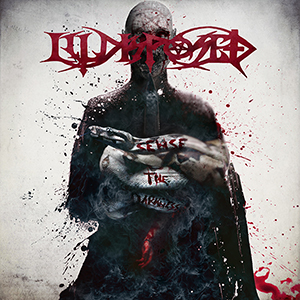 When I was 16 and pretty much breathing and dreaming death metal, my favorite label was easily Diehard/Progress Records.  I bought everything they released that I could track down in Minneapolis (at the time, we had two awesome pure metal record stores, Root Cellar and Nightfall, both now sadly defunct), oblivious to the higher cost of the imported CDs, knowing that I would receive some of the most guttural, punishing strains of Gothenburg-influenced DM available.  Their track record was mind-blowing, and some of Diehard's releases still rank as all-tine favorites for me: Daemon's "Seven Deadly Sins" (whose track "Gluttony" still boasts my favorite guitar solo ever-it's the second one in the song- courtesy Uffe Cederlund), Dominus' "The First Nine," Konkhra's "Sexual Affective Disorder," and Illdisposed's "Four Depressive Seasons."  This was magnificent death metal architecture, a testament to the strength and creativity of the scene worldwide at the time.  I thought it could only get better.

It didn't.  Everything Daemon did after "Seven Deadly Sins" was awful (probably because Nicke Andersson left), Konkhra became a hyper-boring groove oriented juggernaut,  and Dominus gradually morphed into the beyond disgusting and creatively bankrupt Volbeat.  The last great record I bought from Diehard was Nortt's stellar 2003 effort "Gudsforladt," but that album wasn't remotely related to the label's output of yore, and I haven't really kept up with them since about 1998.  The majority of their artists, Illdisposed included, split for different labels.

I was vaguely aware that Illdisposed were still an active band (pretty regularly, at that) but had no real idea of their current sound: I gave up on them after 1997's "There's Something Rotten...In the State of Denmark" album because I thought the songs were becoming less complex, melodic, and caustic, especially compared to their earlier masterworks "Submit" and the aforementioned "Four Depressive Seasons."  Having listened to "Sense the Darkness" several times, I can see that little has changed with the band in almost two decades: they haven't re-embraced the characteristics that made them a near-perfect example of early 90's death metal majesty, nor have they abandoned the traits that resulted in their subsequent fall from grace.  They've been merely content to work with the sound they're apparently stuck in, churning out melodic regurgitations of At the Gates riffs at half-time paces.

The title track pretty much spells it all out.  Illdisposed play this stuff incredibly well, and their guitar and drum sounds are still as monolithic as they've ever been (the traditional Diehard sound was incredibly deep, cthonic, and bass-enveloped, with virtually no midtones to speak of, and it was awesome) but there's not a lot of allure left to the compositions.  It's downtuned, it's somewhat melodic in a neoclassical sense, it's heavy, sure, but it's also insanely boring.  Virtually every time I listened to "Sense the Darkness" I found my mind wandering by about the halfway point.  There's little substance throughout: the record just sort of floats by.  Death metal to me is about pure and utter punishment and immersion; the sound should be so all-encompassing, structurally complicated, and whiplash-inducing that you're forced to focus in on it.  Inevitably I end up comparing almost every death metal record, classic or modern, to Deicide's mighty "Legion"; if a band can't compete with the guitar/drum interplay insanity of "Revocate the Agitator" then they probably are not going to measure up for me.  Of course there are other considerations, atmosphere being the second most crucial (which is where a lot of modern DM like Encoffination, Portal, and Teitanblood succeed brilliantly); Illdisposed circa 1994 were easily able to attain both qualifications, which makes it so vaguely depressing to hear a record like "Sense the Darkness."  It's a rote, by the numbers wade through formulaics, sounding like something the Haunted would have released 15 years ago.

I admire that Illdisposed are still around, but I wonder if they really need to be.  There's nothing revelatory about their new output, nor is there anything remotely alluring about it.  Everything sounds a little too slick, a little too well-produced, a little too professional.  The cavernous reverberations of 1994 have faded away into the sound-muffling walls of ProTools-ridden studios in 2012.  The guitar solos have a gross sheen on them that would make Steve Vai throw up a little.  "Sense the Darkness" doesn't function as an evolution, a continuation, or even as an exercise in nostalgiah.  It's just a gurgling cry from a band that used to be spectacular.  This is better than anything by Volbeat, but it can't compete with any band aligned with death metal's new wave.