It's definitely beginning to feel like Autumn 'round these parts, especially in my sinuses, so please excuse the tardiness of this week's installment of the sounds of autumn column as I have spent the past few days coughing up face muck, but enough about my gross allergies. This week I'll be exploring West Virginia's folk-gone-metal act Nechochwen's and all-star dreamfolk duo Mirrorring's vastly different approaches to autumnal music.

It's not very often I find myself listening to "folk metal" like I used to. I still adore both genres, but it seems the fusion between the two in the most general, equalized sense has run its course, stagnating in a pool of goofy "Celtic" whistles over re-hashed At the Gates riffs (I'm looking at you, Eluveitie. Come on.). As there's more to folk music than getting drunk, there are a select few bands who take a more "serious" approach to folk metal, and I hold them dear, but still approach with hesitation. When Nechochwen, whose first album Algonkian Mythos (Dark Horizons Records, 2006) is a near perfect collection of simple, well-crafted neofolk instrumentals, made the jump to a more metal-oriented sound in 2009 with their Azimuths to the Otherworld, I wasn't super thrilled. Though I wholly appreciated multi-instrumentalist Aaron Carey's ingenuity and incredible technique, Azimuths didn't 100% hold up to the mighty pedestal once set by Algonkian Mythos and previous metal project Angelrust but the potential for greatness was still there. All I wanted was a little more attention to Carey's incredible solo guitar composition, and my thoughts have been heard.

OtO, Nechochwen's newest effort, is not meant to be taken in as a new full-length, rather a "double EP" which concentrates on the two main aspects of Nechochwen: folk and metal. OtO's first half/A-side features extensive classical guitar work from Carey, who is a more than capable musician, though what I was expecting to be more of a straight-up "neofolk" EP proved itself to be a much more complex, progressive rock influenced affair. It is a nice, albeit unexpected and new face for the Nechochwen project, rife with the catchy choruses and driving rhythms we had seen in Carey's other Bindrune project Forest of the Soul, though much more ancestrally-focused, keeping with Nechochwen's Native American theme. "Otomen'pe (Our Ancestors)" and "Haniipi-miisi (Elm Tree)" are the closest to my favorite Nechochwen material, a somber, pastoral song which showcases some of Carey's strongest folk-based material since Nechochwen's debut. Having spent a period of my life in the Appalachian Mountains, I can confidently say these two songs in themselves are some of the strongest Appalachian-themed neofolk songs I've heard, perfectly evoking imagery of the endless rolling hills of my youth.

The last two songs, or "Second EP" make up an entirely different monster. I had a bit of difficulty getting into Nechochwen's previous metal endeavors, but these two songs, titled "Hey Ya Ho Na" and "Pekikalooletiiwe (Instructions; an Exhoration)," show much stronger and more enjoyable songwriting, with memorable melodies, massive atmospheres, and exciting structures. Always on the verge of explosion, these metal songs sharply shift between calm folk, Bathory-inspired "epic" metal, and bizarre near-technical material as seen on the album's closer. It's unique and by far a better representation of the previously established Nechochwen sound than I feel Azimuths was, communicating Nechochwen's reverence for nature and their surroundings with a newfound sense of clarity.

The only real complaints I have about this album lie within the length, which ends just past the thirty minute mark, leaving the listener wanting much more, and the "Native American" parts, which at times got a little hokey. I understand the importance of Native American culture to Nechochwen overall, but some of the vocal drones seemed a bit much, and the chant-and-drums break in "Hey Ya Ho Na" almost comes off as a caricature of what they are trying to convey as something with artistic merit. It's a shame, as Native American culture often gets ignored in North American metal and it is always neat to see a band who attempts to communicate those musical styles. Maybe next time?

Complaints aside, I feel Nechochwen has found themselves again with OtO. Both "Nechochwen" and "Pohonasin" drew upon the strengths of previous releases and funneled it all into this concise two-faced portrait. Bindrune Recordings should have vinyl preorders up soon, but for now you can stream OtO from the Bindrune Recordings Bandcamp. 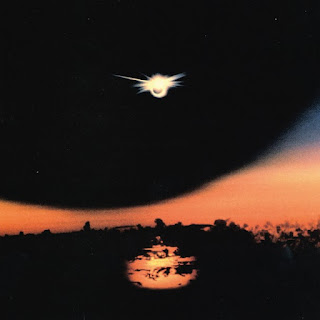 Liz Harris and Jesy Fortino are Mirrorring. Gosh, even after half a year of this album on the market it really hasn't set in that these two released a collaborative effort. For those of you who don't know, Liz Harris and Jesy Fortino are at the forefront of the hazy, psychedelic end of folk music, with Harris's Grouper concentrating on blurred sounds and the distant sounds of what might resemble folk music and Fortino's Tiny Vipers a skeletal structure of folk music, stripped down of any embellishment and meat; naked and pure. The union of these two "opposite edges of the same side of the coin" minds could only be a perfect union right in the middle, a future archetype for aspiring artists to follow...and it is.

Mirrorring's self-titled debut, released early this year on "pretty experimental" powerhouse Kranky, is a gorgeous union of these two minds, melding Fortino's micro-simplistic songwriting approach with Harris's astral-bound psyschedelia into a sort of battle of the subtle, creating rich, complex and sprawling atmospheres the likes of which I've never heard. I close my eyes and I feel like I'm flying, or rather floating...it really depends which songwriter takes the forefront. The sounds of crackling fireplaces, a distant gust of wind, a gentle flutter of Harris's effects laden guitar, Fortino's solemn voice; it all fits together like a puzzle made of smoke, becoming more abstract and drowsy as it reaches completion, and that's everything I expected and wanted from this collaboration. I've heard the "more of the same" comment from a few people, but given Harris and Fortino's near perfect back catalogs, why would "more of the same" from these two ever be a bad thing?

If you like music which sounds like sleeping under a star-studded canopy on a bed of soft pine needles, Mirrorring's Foreign Body will be all you will want to listen to for a long time. Trust me, it's been out since March and I listen to it at least once a week. Grouper and Tiny Vipers fans who haven't jumped all over this, shame on you. Shame shame shame. Available both on compact disc and LP from Kranky.