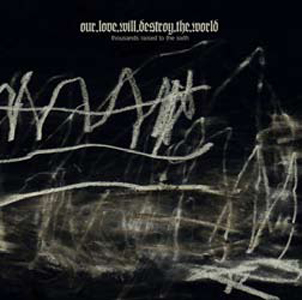 Massive, expansive, enthralling, and utterly exhausting new double album from Campbell Kneale's Our Love Will Destroy the World project, perhaps as close as he's come to a full statement of intent with this moniker than anything previously released.  Certainly longer than any OLWDTW album before it, "Thousands Raised to the Sixth" is a monolithic piece of work, a declaration of comfort and confidence as Kneale furthers the explorations he began on 2010's "I Hate Even Numbers" and refined on this year's "Limbless Soldiers Flight."  Moving away from the sheer and shimmering excess that characterized both his work in Birchville Cat Motel and the earlier releases of OLWDTW, here Kneale delves further into the subliminal co-opting of African forms, much as William Bennett of Whitehouse has done with his new Cut Hands project.  While not as foreboding as Cut Hands, Kneale's compositions here are certainly no less caustic, but they're imbued with a tremendous regard for melody and the power of suggestion, with towering glaciers of songs that feel like they're hiding away as much as they're offering up.  Layering has always been Kneale's greatest strength, and he employs it here shamelessly, stacking sounds and tones on top of each other until he emerges with a goopy mess that somehow moves beyond the sum of its many parts.  Psychedelia is taken out to the great empty plains and forced to call down the rain; think of it as a celestial version of Paul Simon's "Graceland," both naive and welcoming in its reverence for foreign culture and sonics.

Disc One is the more inviting of the pair, with the sounds found therein seeming altogether more joyous and open.  Obviously there's an insane amount of audio going on here, all fighting for space and attention within Kneale's  epic construct; attempting to focus in on any one aspect and understand its correlation to the whole is overwhelming, as well as pointless.  Everything here functions as an apparatus.  As haphazard as all of it sounds, these disparate elements of audio, these found drum patterns, these wheezes of various instrumentation: they all go together in a very sophisticated and instinctual arrangement.  When the massive stuttering percussive patterns of "Early Scrawl Like Fuck Academy" bleed into the heavenly windblown drone melodies halfway through the track, there's a feeling of clouds parting and sunshine beaming down, as though it were the only possible and true way for the piece to move towards.  It's gorgeously uplifting and confusing at once, the shattered beauty of the disenchanted becoming a means of moving towards the light.  Likewise on "Forgotten Stormbringer" and "Zine Boredom"-for all of both tracks' unbridled and severe intensity, there's a loveliness shining through them, beckoning you in further, offering you transformation and rejuvenation if you're willing to go deeper into each.  Kneale understands this sort of transcendent transdimensionality, creating an auditory process of attaining something akin to zen through the supposedly simple act of layering one thing on top of another.  But it goes beyond mere collage: like any truly visionary artist, Kneale sees a whole that might be more ghostly or translucent to everyone else.  In this sense he's more like a seer than a musician, calling things into being from beyond and arranging them just so for maximum (and intended) effect.  The sonic overload OLWDTW revels in is precisely the sort of means necessary for total psychic immersion; the end result for those attuned to the band's unique frequency is a break with consciousness and a transportation to myriad headspaces beyond.

Disc Two finds you in that headspace and attempts to fuck you up royally.  Across five massive tracks, Kneale subverts the joyous cacophony of the previous compositions on their heads and sends your brain on a still-life bummer of a death voyage, an excursion into the forgotten wastes of ambient where repetitious figures of found-sound and whisps of the the future collide in frighteningly oblique towers of menace.  "Icy Reptile Swastikas" lurches you through its stumble drunk dance patterns, wheezing towards an explosive conflagration of distorted melody and frenzied percussion mixed into a giant ball of audio overload.  It's the sheer and foreboding intensity of back to back tracks "Cloud Water Assembly" and "Thousands Raised to the Sixth," though, that most demonstrate Kneale's vision on the album's back end: crumbling and stagnant piano figures ring out almost infinitely as sky-scraping electronics stumblingly vomit themselves over the near entirety of 15 minutes, oozing brutally into the bee-storm shrapnel detritus of the title track's unending assault.  It's close to a half hour of some of the most challenging sound layering you're likely to hear, offering up a gauntlet of both physical and psychological endurance tests.  Inhabiting Kneale's iconoclasm becomes a ritual in the darkness, flashes of light exploding all around you, their origins frustratingly (and terrifyingly) unknown.  Disc closer "Neon Black Sleep Camoflage" offers a little bit of respite in its return to the more inclusive "global" sounds found on disc one, easing you out of the permanent frigidity Kneale has summoned up, but it's ultimately too little, too late.  The damage is done; the psychic scars are carved into the subconscious flesh.  The mournful and destroyed guitar lines that Kneale lets surface towards the end of the track betray the blackness hidden in the core of "Thousands Raised to the Sixth"; whatever joy materializes in life is ultimately drowned by the crushing and immense weight of the struggle that comes to define our personal existences.  The kaleidoscope of life is essentially a teeter-totter: balance is an impossibility, and the immediate and visceral reactions exemplified by the music of OLWDTW beautifully illustrate the ever-changing flux of the world around us.

Taking this album in is an overwhelming experience.  I've listened to it about a dozen times now and still feel like I've only begun to unlock its secrets.  It's probably one of Kneale's most dense works musically; there's enough material here for 10 albums, let alone the two we've been presented with.  In a sense it almost seems Kneale is letting us off easily, as if daring us to want more (and be sure, there is- a lot).  These are true dreamscapes, technicolor vistas of the imagination sculpted into sound for a peak into an entire series of bizarre, beautiful, and at times dangerous worlds.  We're left to navigate them on our own.  The paintings which adorn the package give some clues but ultimately the journey is ours to take, and the destination will be different for all of us.  For an artist to create works which so consistently allow for individual exploration and reaction, essentially immune to critical interpretation by virtue of their creator's ability to so effortlessly paint his or her life in sound, speaks to a staggering talent.  Campbell Kneale has been doing this sort of shit for decades now, and the output just gets better and better.  "Thousands Raised to the Sixth" is one part of a seemingly lifelong attempt to illustrate the joys and pains of a private existence through the exorcising nature of creation; that the results of that attempt are shared by the artist is a gift any of us remotely interested in musical transcendence can be eternally grateful for.  One of the best of 2012 for me, hands down.  Available via Handmade Birds.  Don't sleep on it-just get it.