The Fragile Beauty Transcendent: An Interview with Campbell Kneale 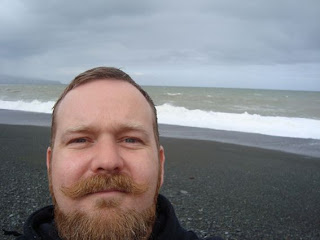 Few artists' music has meant as much to me as Campbell Kneale's.  When I think of the albums that I would truly define as "life-changing" for me, I end up with three: the Dead C's "Tusk," Burzum's "Filosofem," and Birchville Cat Motel's "Chi Vampires."  Together those three records, but Birchville's especially, define what I love most about music, what moves me most fervently on a purely emotional level.  Intellectualization doesn't factor into it: when I throw "Chi Vampires" on the stereo, everything else evaporates and I'm left solely with the sound.  It becomes all-encompassing and all-important, a perfect communion with something bigger than me and my stupid little world.  I can feel the music in me and all around me, cloaking me with its raw and inherent power.  Campbell Kneale has that truly rare capability with his music, to allow the listener to go deep into and out of themselves via the sounds he creates.
I was recently given the chance to interview Kneale.  His answers to my questions were incredibly thoughtful and visual.  Sometimes when writing about music, there's a tendency to overthink and try to attach too much academic definition to something that instinctively defies it, and in that sense some of Kneale's responses to my questions were humbling for me, but reaffirmed something I already knew in my heart: music is ultimately about feeling.  Nothing else matters.