The mere concept of a end of year list is one that I find incredibly difficult to cope with. Rarely do I even hear over 10 releases that come out within their respective year and 2012 has been no different. I'm still working through 2011's releases. My listening habits can be exemplified by the fact that my most heard group this year has by far been punk/prog experimenters Cardiacs (a group you should all most certainly hear). So I decided I would discuss two long standing but underrated acts whose relevance was re-affirmed with releases this year. I'll expose a couple of particularly incredible live shows I saw, and include a few favored albums. 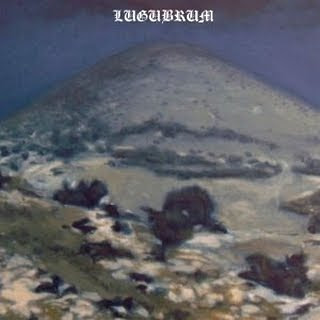 Lugubrum - “Face Lion, Face Oignon” [Aphelion Productions/Those Opposed Records]
Yes, I'm cheating a bit as “Face Lion, Face Oignon” was first released on vinyl in November 2011, with its CD release in March of 2012, so I'll balance it out and say it's a 2012 release (yeah, I said I'm bad at this). Lugubrum's legacy of combining filthy atmosphere with creative riffing and phrasing has set them apart from the rest for 20 years. Beginning in the early nineties as a typical second wave group it took a couple of albums to develop their characteristically raucous farm oriented style accented by banjo and saxophone. The newest release continues where 2008's incredible “Albino de Congo” left off morphing into a drunken blackened jazzy rock. In an era where doom, gaze, and post-everything dominate it's refreshing to see Lugubrum's disgusting 'Boersk Blek Metle' continue to evolve and stand tall. Lunar Aurora - “Hoagascht” [Cold Dimensions]
If I was to pick my favorite release for this year it would be Lunar Aurora's “Hoagascht”. Formed in 1994, the groups penchant for releasing albums in batches began with a trilogy of hyperactive symphonic black metal made up of “Weltengänger”, “Seelenfeuer” and “Of Stargates and Bloodstained Celestial Spheres”. A dramatic shift came with “Ars Moriendi” setting the stage for the  atmospheric and hypnotic form present on the next three. This second arguably most successful and creative period led the resurgence of interest in cold, hypnotic black metal that was heralded with groups like Paysage D'Hiver and Darkspace. “Hoagascht” was released after a five year hiatus and employs a considerably warmer atmosphere culling Lunar Aurora out of the winter and into what could have been the spring of their career. Unfortunately, this absolutely essential entity has recently announced their end leaving us with 9 albums of subtle and elegant black metal that, if you've not experienced yet, stop listening to 2012 releases and check out either “Elixir of Sorrow” or “Zyklus”!

Chicago had some incredible live shows this year. Meshuggah's performance at the House of Blues in May proved that their rhythmically driven atmospheric monoliths are just as effective live as on record. This was my first time to experience them live after first hearing them almost 15 years ago, and it lived up to my anticipation. Given the groups growing popularity, they've respectfully retained all that makes them essential to metal in the modern age.

Viking/Folk metal giants Moonsorrow hold the place for my favorite concert. Their releases continue to strip the folk elements in favor of a more vast sound demonstrating that they are by far the most mature of 'Viking' metal groups. 2011's release which translates to “As Shadows We Walk in the Land of the Dead” was presented with crushing grace. The kids who were anticipating the bouncy fun of tour mates Korplikaani, were noticeably shocked by immaculate epics intended to destroy you rather than make you dance. The inclusion of 'Kylän Päässä' on the setlist quite frankly made me lose my shit.

Another highlight would be my introduction to Chicago locals Guzzlemug, whom I first witnessed opening for Ruins' Yoshida Tatsuya. Moving seamlessly between Swans-esque country drones, tech-black reminiscent of Deathspell Omega, to avant-jazz spasms is just one way to imagine their sound. I've tried to make it to every show they've played this year, and each has demonstrated their continual evolution. This group needs recognition outside Chicago.

This leads me to a few favored releases from 2012 (in no particular order):

Kayo Dot - “Gamma Knife” [Self-Released/Antithetic Records]
Toby Driver's main group unleashes what is essentially a slight manipulation of a live recording. This one reminds us a bit of previous incarnation Maudlin of the Well and earlier Kayo Dot. Heavier and more immediately 'active' than their past couple of releases, Toby proves yet again that he is a leading figure in the avant-garde today.

Stagnant Waters - “S/T”/Yurei - “Night Vision” [Adversum]
Adversum released two fantastic albums demonstrating that the tradition of Norwegian experimentation that began in the mid to late nineties is far from dead. Stagnant Waters' self titled album grates against the furthest reaches of industrial black metal, while Yurei sways away from metal entirely with his 70's prog infused avant-rock. Keep an eye on this label in the future.

Murw - “Kanker” [Heidens Hart]
A group from the Netherlands that really impressed me with their 2007 demo “In de Mond van Het Onbekende Wacht Een Oceaan”. Their blend of dissonant wandering black tones with more unusual death doom makes me think of Ved Buens Ende having an ugly child with older Katatonia. “Kanker” further develops the doom elements for a rather enthralling listen.

So there's my sort of year end re-cap. I'm just honestly not too into what's been coming out lately, but I'm sure I've just been missing out on plenty of things. Now time to rummage through some of these year end lists and resist listening to “Sing to God” or “On Land and in the Sea” by Cardiacs (hint, hint) over and over again.

-Ben
Posted by The Inarguable at 9:03 PM