Trying for a retrospective description of briefly existing occurrences is absurd. Be prepared for vague reminiscences of events from months ago.

Murmur at the Ultra Lounge
Sure, they were opening for Aluk Todolo, whose "Occult Rock" album has made them minor media darlings this year, but it's very rare that extended krautrock jams do anything other than put me to sleep. Aluk Todolo, for me, was always about that horrid blown-to-hell recorded sound and broken fragments of eerie near-silence, and that's not something they even attempted to achieve live. But I digress.

I'd really like to be adding "The brilliant new Murmur full-length" to this list, but while the album is I understand fully recorded, the time between "done" and "mixed, mastered, and pressed" is rather extensive.
Murmur's extant discography centers on Matthias Vogels' toothsome paean to heroin, "Mainlining the Lugubrious" from 2010. And that album is really good, really it is, but it remains sickeningly opiated black metal--pride of Chicago and W.S. Burroughs. The songs they played that night, though, betrayed the now-established inclusion of Shane Prendiville and Charlie Werber, some of the mad geniuses behind Guzzlemug.
New Murmur is chaotically technical, full of prime meters, strange pitch collections, battering drumming, and bursts of singing. Fuck that was good.


Protest Heaven Festival
I hadn't been down to Wicker Park for a while, and I'll be damned if Hipster Central hadn't gone a step or two further into gentrification--it's all muscles, Affliction shirts, and high heels soaked in awful beer and oddly-colored cocktails. Old mainstays of the local artsy community are slowly fading out; The Enemy, established noise venue/apartment, hosted their last show in July. Upstairs, though, the rather odd Heaven Gallery, with its large collection of vintage clothing, is still hosting live gatherings of members of Chicago's free improvisation scene, occasionally including old Enemy mainstays like Jason Soliday. 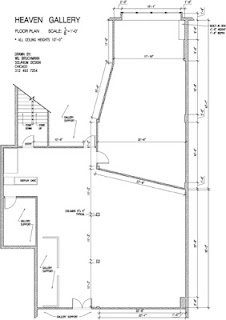 In September, we visited Heaven Gallery for an event they described as the Protest Heaven Festival. This took the form of something I'd like to see all the time: 11 musicians appeared and went through a cycle of different combinations from duos to quartets. Katherine Young displayed the glorious sounds of upper-register heavy bassoon with amplification highlighting unpitched breaths and key clicks, Frank Rosaly made a small jazz kit and assorted percussion into a heaven of soft to exhilarating sounds, Guillermo Gregorio turned a clarinet into a slicing, virtuosic weapon. Jim Baker improvised on the beauties of atonality with truly effective piano (please keep in mind that I more often than not hate the inclusion of piano in free jazz), Daniel Fandino spewed dissonant bursts of guitar, Shane Perlowin gave his a more gentle touch, Jason Roebke caressed and combated his bass in turns, Dave Rempis shrieked and croaked through his saxophones . . .

If anyone had any question that group improvisation is the home of a myriad new, inspired, powerful performances, this show was the antidote. I'd see this again and again and drag you all to it given the chance.


Anatomy of Habit at the Cobra Lounge
Holy hell. 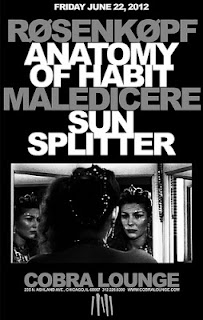 During out-of-town-together bonding with our compatriots Sun Splitter, the lot of us agreed that Anatomy of Habit was the best extant band in Chicago. This wasn't something that took a drawn-out debate on the various merits of a bunch of favorites, which we certainly all have. All it took was one person putting on an Anatomy of Habit record at two in the morning. We all already agreed.

Even the best shows rarely engulf us in the cult of humanity, something Anatomy of Habit builds itself around. Every last song is a tribute to the internal/external dysfunction of the human being, its loves, rages, and fears for the future. Add to that the wonder of a group full of musicians taking their instruments and songcraft to a new place that forms a union, rather than a contrast, and you have a hint of the hypnotic power that most of the reviews miss with allusions to "post-punk" and "doom metal."

There's a night that ends with screaming chants and broken glass. 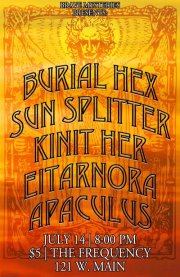 Burial Hex/Kinit Her at The Frequency
I've been a fan of Burial Hex and Kinit Her since Burial Hex and Wormsblood appeared at the Matchitehew Assembly in 2009. Someone referred me to Kinit Her's outsider-ritual take on neofolk through common members of Wormsblood, I found a few sounds online, and was hooked.

The opportunity to finally see Kinit Her live, alongside one of the final live appearances of the Burial Hex project, was not up for debate. Having seen Burial Hex the previous night in Milwaukee, again with post-human pounding of Sun Splitter (there's an interesting common theme here), we took off for Madison and a day spent around the Bartok violin/horn-and-shofar edges of a Kinit Her rehearsal.

The show, when it finally came around, left me short only of another few hours of Kinit Her live. The strangely twisted vocals, dark moor atmosphere, and addictive songcraft (mixed with a perfect cover of Death In June's "Hail the White Grain") could have gone on most of the night before I became sated.

Burial Hex, aside from the dark-room burning-Palo Santo occultism, manifested as noise-wrapped baroque rage. Clay Ruby is sometimes a piece of human installation art, wrapped in bursts of keyboard toccata, screaming anger, reverb tanks, and flame. Sorry, you guys who have missed out permanently. We'll see what he does next.
Posted by The Inarguable at 4:29 PM