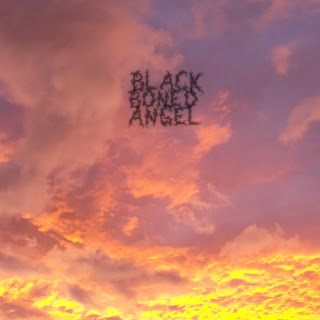 Black Boned Angel is dead. Having dragged a small army of dedicated listeners through audio hell since the Supereclipse EP some ten years ago, unleashing an arsenal of albums and collaborations along the way, another one of noise mastermind Campbell Kneale's (Birchville Cat Motel, Our Love Will Destroy The World) projects has met its demise. An immovable force of harsh, oppressive drone/doom metal, Black Boned Angel's pounding, pulsating masses of bleak, bass-heavy square-wave worship has proven to be a feat of discipline and deference to the drone.

On the subject of discipline, it is discipline which rules a great portion of The End, the aptly named closing of the cycle for Black Boned Angel. Comprised of three lengthy, lengthy forays into the blackest of pitch and furthest distance of sustained feedback, it is the duo of Campbell Kneale and James Kirk's tasteful balance of calculated, pummeling drone/doom and free, bottom heavy noise churn which makes Black Boned Angel's final chapter a most gripping, terrifying, and intriguing expiration to an already inspiring and exciting existence. Hearkening back to their first collaboration with fellow drone aficionados in Nadja, the achingly beautiful Christ Send Light, The End features some of Kneale and Kirk's most radiant sound construction, relying on complex chord structure, subtle use of melody, and massive, skyward harmony to function as a sort of "light at the end of the tunnel." It's not all beauty, though, as the resplendence turns to decay; the heavy percussion disappears and is replaced by a horrifying, scraping layer of noise, while the once-beautiful guitars descend into a droning monotone. It is at this point that one realizes that The End might not just be Black Boned Angel's final declaration, but their own representation of death itself. Though death is romanticized in literature and music, it is very obviously a horrifying, harrowing experience, fading in and out of consciousness, the reliving of past experiences, the questioning of the metaphysical. It's all here, hidden within the crashing waves of guitar, painful shrieks, tendon-snapping percussion, and disconcerting noise.

Somewhere in "II" our protagonist's final agony ends, and the rest of this movement of The End is a magnificent eulogy, both for our fallen friend and Black Boned Angel itself. If the introduction was the beginning of their twilight hours, manifesting itself as the sunset we see on the album cover, then this halfway point is a clear night sky with a painted moon. There are no stars. It is beautiful. Quiet, twinkling piano cuts through the monolithic, melodic guitar, just loud enough to barely obscure the unassuming, sung voices, fading ever so slowly into a dull drone. This is the end.

But what comes next? Nothingness. Horrifying nothingness. Trudging along at a relative mid-pace, "III"'s more traditional "doom" gait is an oppressive one, hitting like a sack of hammers. Although harmonious, there is an unsettling character to this final statement, oscillating through its sixteen-and-a-half minute span. It is a grand declaration. "We are through." A magnificent end to one of doom metal's most obscure and acquired tastes. Will Campbell venture into the doom metal world again in the future? I certainly hope so.

The End is also one of the most deluxe-packaged CDs I have in my collection. As if being housed in a lotus-style wallet wasn't enough, both that and an oversized insert are placed inside a printed 6.5x6.5" envelope, which is then inserted into a 7x7" translucent envelope with a larger insert. Eight pieces in all. Hand-numbered out of five-hundred. A necessity.

-Jon
Posted by The Inarguable at 8:48 PM