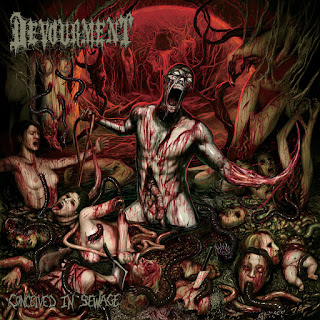 This is my least favorite Devourment album.

I want to make this clear, since those of you who read "writer" tags around here may have noticed that I'm in love with the avant-garde, I've been gurgling about pregnant sluts and whores for most of my "adult" life. [Dear god, I hope my mother doesn't read this. -V.]

Devourment has been a long-term influence on my musical choices, sending me through hordes of other slam bands looking for sustained sickening gurgles to match Wayne Knupp's and the slamming grooves that reach down and grab your hips. Grab them. But while fueling my car during one of my recent very-repeated listenings of "Conceived in Sewage," I had to make my own gurgly rhythms and hip-shaking grooves.

Really, it's a solid entry in the field of moderately nondescript death metal albums, with reasonably appealing gurgles (Majewski, if you're responsible for the bursts of comprehensible English on this album, I will have my revenge), heavy blasts of chugging chords, and fairly technical drums--which aren't a surprise after 2009's "Unleash the Carnivores." But it's not 1.3.8, no matter how much better the production (Erik Rutan) has gotten. And I honestly miss the messy pingy snare chaos.

Like Majewski said in the press bio, "Conceived in Sewage" is "a bit of a throwback to old school brutal bands." But that's not what makes Devourment legendary in a way that most of those nameless bands can't touch, and they didn't touch the glory of old Suffocation. I won't leave when I hear these songs live, but I won't be throwing myself around quite the same way.
Posted by The Inarguable at 9:19 PM