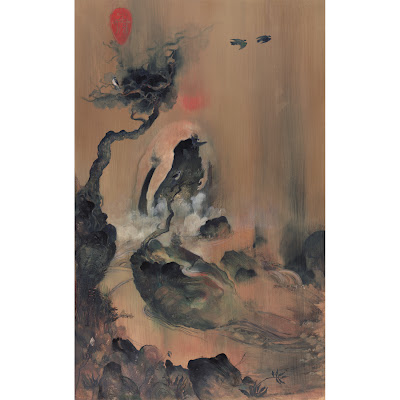 This is rather a different experience for me than the last Utech review I posted, Dead Neanderthals' "Polaris." Instead of being confused because of my familiarity with the artist, I formed 90% of my opinions while still not having a clue what or who Pan Gu was.

The record itself immediately dispelled the first bit of information I had: "pretty fuckin jazzy." [source anonymized to protect the embarrassed!] Pan Gu is something, but it sure ain't jazz. Those first sounds were a mixture of very noise-oriented electronics and lovely triadic harmonies built around a static ambient drone. Really tasteful, extremely pleasing, especially in the dark.

The first impression continues through the album; "Primeval Man" is an organically crafted work of art pieced together from soft beautiful sounds and noise that never stagnates or becomes hateful or destructive. Couldn't ask for a better attempt. I'm really impressed.

I became slightly less impressed when my research finally bore fruit and I determined that the noise was Lasse Marhaug. Well, of course it's tasteful and well-done. It's Lasse Marhaug. For those not familiar, if you're still reading this review after I said "noise," go fix that. He's worked with Merzbow, Government Alpha, Kevin Drumm, Frode Gjerstad (wait, is that a useful name to drop?) . . . it goes on and on. He's basically the younger, balder, Norwegian Merzbow.

His collaborator in Pan Gu was a new name for me. Leslie Low is apparently the frontman of Singapore indie bands Humpback Oak and The Observatory. His work in Pan Gu is every bit as beautifully sentimental as his vocal-centred works, and betrays the experience of The Observatory's soundscapes and experimentation.

This is one of those records you wouldn't expect to exist, but, thankfully, it does. And if you don't mind, I think I'll take advantage of that and turn off the lights.
Posted by The Inarguable at 11:23 AM