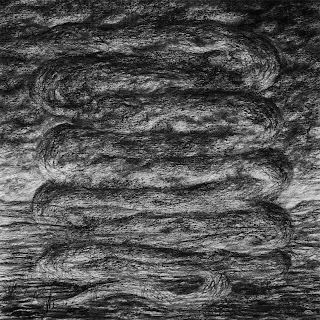 My relationship with Ash Borer has been, well, let's say interesting. I remember really getting into them around the time their first demo came out some four years ago, right at the peak of the "first wave of Cascadian Black Metal hype" (oh Jesus), and with good reason. While most of their "scene" (I'll keep my thoughts on it to myself, but if you do some digging, you can find my sentiments) relied on sprawling, heady songwriting, focusing more slight melodies hidden among layer upon layer of harmony, Ash Borer liked their melodies, and melody is what drove their music home. As opposed to taking their songs in as a whole, which works for some, I would find myself humming a melody from their first demo or split with Fell Voices (who will be releasing a new full-length this year), and would find myself wanting to listen to the entire half-hour demo or twenty-minute-long song if not just to get the satisfaction of hearing that one melody in its given context. That worked for them, and that's what set bands like, but not limited to, Ash Borer and Fauna, whose Avifauna continues to impress, apart from the Weaver-school of lackluster black metal, which, unfortunately, seems to be doing much better in the larger public spectrum.

Then, with the release of their first, self-titled, full-length, Ash Borer radically changed their sound to something a bit more...traditional in scope. Raw, menacing, and not as melodic, Ash Borer's full-length engagements were built upon large, desolate landscapes; what happens when the forests of their region are gone. A complete about-face, focusing on the majesty of ugly emptiness. While I enjoy delving into Ash Borer and last year's Cold of Ages every once in a while, they don't really "do it" for me like their earlier work. Not to say that these albums aren't good, quite the contrary, actually, it's just that I didn't feel as drawn in this time around.

Bloodlands converted me once again. A two-song EP whose length rivals most full-length recordings, the menacing atmospheres found on this soon-to-be-released slab of wax seem to be the culmination of Ash Borer's apocalypse-bent approach. Opening with a lone, slowly-plucked guitar and a very eerie, warbling synthesizer drone, "Oblivion's Spring" explodes into a miasma of slithering sound - walls of crawling guitar and distant, pained shrieks, which have since become an Ash Borer staple, at their most terrifying and atonal, echoing throughout the cavernous emptiness of dead earth. The speed and wrath of "Oblivion's Spring" is paired perfectly with the aptly-titled "Dirge/Purgation," whose midpaced near-muscle acts as both a solemn funeral procession ("Dirge") and forced cleansing ("Purgation") for this monstrous EP. This is Ash Borer at their most blackened, their most frightening, and their most succinct, and, yes, it does take 34 minutes for Ash Borer to make their point as clearly as possible.

What sets Bloodlands above and beyond Ash Borer and Cold of Ages is the extra attention Ash Borer paid to their use of texture. Though N., who you might know from my personal favorite Servile Sect, has been part of Ash Borer on synthesizer from the band's crux, I really feel like he never had a chance to shine, mostly pushed into the background on previous albums as a sort of background texture, something you'd hear after many listens and appreciate later on. Bloodlands shows Ash Borer using the synthesizer to its fullest potential, filling in all the cracks with alien sound and hitting the listener with a fluctuating sense of uneasiness, wavering as either track moves on, phasing in and out of familiarity. A personal favorite moment happens during "Purgation," in which the synthesizer slowly pitch shifts, following an extended, bent guitar note. Though it only happens a couple times throughout the track, and only lasts a moment at that, but the attention to minor details like utilizing the pitch shifting knob on the synthesizer shows an extreme attention to detail which is fully realized, resulting in endless, unique textures much like the one I just described. It might seem like I'm only concentrating on the synthesizer use here, but, in reality, it's made all the difference! The solid songwriting was there, it just needed to fully manifest itself with a fitting, fully-engulfing atmosphere, which, frankly, could only have been brought about by clear, attentive, and louder synthesizer work.

Is Bloodlands a win? Certainly so in my book, and I'm glad to hold Ash Borer in such high regard once more. The creepy sounds found within this two-song EP are a refreshing take on the oft-melodic and unoffensive "new school of US black metal," and may even be a herald of change...but hopefully not a tidal wave of change. Bloodlands will be available via Gilead Media very, very soon. Keep your eyes peeled for a pre-order, which should be up within the next week.

-Jon
Posted by The Inarguable at 8:56 PM