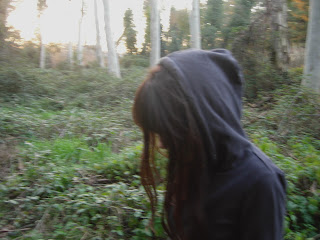 Francesca Marongiu's heady-yet-catchy electronic musings under the Crisne moniker and as half of Architeuthis Rex have taken us from the furthest reaches of outer space to the ocean's murkiest depths, but never before has she so explicitly taken us into the human psyche. With Agarttha, her newest solo effort, Marongiu pays homage to Carl Jung's studies of archetypal personalities and Polish alchemist Michael Sendivogius (whose work is quoted in the album's title, A Water Which Does Not Wet Hands) with a bit of alchemy all her own, intelligently fusing the ethereal qualities of psychedelia, folk, and ambiance with doom metal's depth and plod, all beautifully wrapped in her warm, emotive voice.

At eight minutes and forty-four seconds in length, "Visions of Alina" is not only A Water Which Does Not Wet Hands's longest offering, but also its most varied. A slow-burning array of sweeping pulses, excellently arranged electronic sampling, and a unique "heavy, but not heavy" atmosphere, laden with complex emotions and crushingly slow rhythms, "Visions" is the epitome of the darkness one finds in the light. The beauty of the flame draws the moth near, but its destructive heat ultimately brings about its demise, much like how "Visions of Alina"'s calm surface hides something sinister; something draining. The magnitude of this music will not fully hit you at first, but rather when you least expect it, manifesting as a slow frown on a sunny day or a late night bout of racing thoughts. There is terror in beauty. There is black pitch within the flame.

"From the backward special theatre of archetypes, Agarttha is a flashing journey into the past dream of a gypsy moth whom powder ferries the listener into the twists and turns of the unconscious among remote architectures of black pointed stones and echoes of warmth and light." -Francesca Marongiu/Agarttha

The A Water Which Does Not Wet Hands LP/poster is currently available for pre-order from the ever-challenging, ever-great King of the Monsters Records. The first 100 orders will receive purple vinyl. Support.