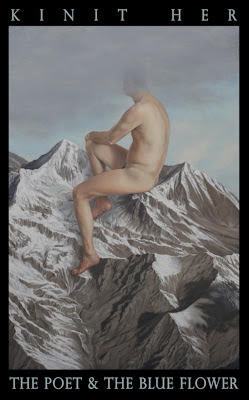 Wisconsin avant-neofolk duo Kinit Her as quickly ascended the ranks of my internal "favorite bands" list. After a period of soul-searching and various genre experimenting which resulted in their various early demos, particularly Glyms or Beame of Radicall Truthes and Menial as Archivists, the artistic union between electronic sound manipulator/Brave Mysteries labelhead Nathaniel Ritter and multi-instrumentalist/modern composer Troy Schafer truly found themselves with Small Doses release Gratitudes and haven't looked back since. Reverent to both ancient and modern composition styles, Kinit Her's almost neo-medieval sound fully manifested itself with last year's Storm of Radiance, a unique amalgamation of Dowland-inspired string work, mantra-esque voice drones, and intricate electronic meditations which actually ended up as my absolute favorite release of last year. Hot on the heels of Storm came The Cavern Stanzas, which showed this duo flexing their "new music muscle," rife with bizarre discordance and rich psychedelia; another face to the ever-changing, quality-driven beast that is Kinit Her.

Never ones to slow down, a new year brings even more Kinit Her material, manifesting in the soon-to-be-released Avant! Records LP The Poet & The Blue Flower. Focusing more on the song-oriented material of old, The Poet is a much more "flowing" affair in comparison to Schafer and Ritter's most recent efforts, pulling back from their Stockhausen and Crumb-inspired modern discordance in favor of beautiful, cascading violin work and warm ambiance.

The Poet & The Blue Flower will be available from the excellent post-punk/neofolk/darkwave/industrial powerhouse Avant! Records on June 21st.