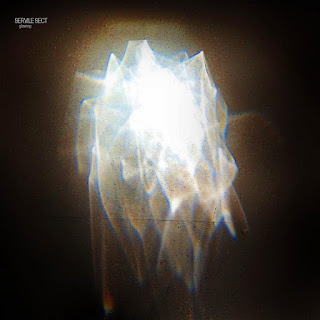 Servile Sect really is something else. A true entity from black metal's furthest left field, the duo of Luke Krnkr (Sadness Saturn, ITHI, Cvbe ov Falsehood) and Nhate Clmnt (Ash Borer, Cerebrate, Golden Raven) project themselves into the deepest, blackest recesses of space, mutating into a mash of alien sound collage, eerie, ethereal ambiance, and, of course, boundary-pushing black metal. With their initial roots burrowed deep in cosmic oddity, Servile Sect has only become more reckless and experimental with time, garnering near-universal praise and the support of musical juggernauts the likes of R. Loren and Sonic Youth mainman Thurston Moore, who released the CD edition of Realms of the Queen on his Ecstatic Peace! imprint.   Though based in hazy, droning black metal, Servile Sect has been known to incorporate elements of krautrock, noise, Stockhausen-inspired modern classical music, and even, dare I say it, hip-hop into the fold, becoming more unique and formless as the years (and miles between the two members, who have since moved to opposite sides of the country) increase.

With Glowing, Servile Sect's latest 10" EP, we see this duo's penchant for abstraction increase exponentially. A three-track excursion lasting a mere twenty-three minutes, Glowing shows Krnkr and Clmnt's compositions at their most mature and polarizing, no doubt to raise eyebrows and cause many an argument on various silly internet forums. Manifesting itself as a sort of slow metamorphosis, Glowing is an exercise in balance, with Krnkr and Clmnt shifting weight equally between their more alien, experimental side, and, of course, their black metal roots. Opener "Frenzy of Cubensis" shows Servile Sect at their most abstract and primal, a sort of blackened Throbbing Gristle jam, complete with a minimal industrial beat, odd, sequenced loops, and a distant black metal troll rasp. "Evoke" brings black metal guitar into the fold, erupting over a sampled tribal drum loop, again a vestige of their Throbbing Gristle influence, before fading into a bizarre bout of ambient noise. Closer "Blasting Beyond Vortex" shows Servile Sect going full-tilt, a near-thirteen-minute harsh black metal affair. Based around a consistent, droning riff, this might be black metal in the style of the greats like Paysage d'Hiver, Darkspace, and Vinterriket, this reviewer almost feels that Servile Sect is attempting to reverse their usual "black metal by way of noise" formula with a static "noise by way of black metal" track, almost mirroring the like-minded Wold's evolution (though much, much better).

What really sets this EP apart from other "space-themed black metal" bands is that it isn't based in the boring, bleak static which plagues the genre. No, there's something oddly explosive about this release, as it is with the entirety of Servile Sect's catalog. Krnkr and Clmnt's nebular approach glows at its brightest with this aptly-named release, which is only further accentuated by Mike Bjella's (GOG/Sounds of Battle and Souvenir Collecting) beautiful artwork. Expect a pre-order link via King of the Monsters Records within the next few days. Trust me, you want this one.

-Jon
Posted by The Inarguable at 9:04 AM