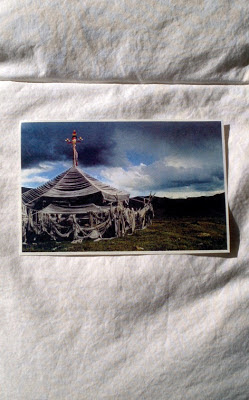 My love for musician Steven R. Smith's extensive body of work should be no mystery to loyal readers of this blog. A multi-instrumentalist, luthier, printmaker, and a key player in the now-defunct Jewelled Antler Collective, Smith's wholly unique approach to folk and experimental music has been a constant source of awe from my first experiences with Thuja and Hala Strana some five years ago or so. From the Soviet Bloc-inspired sounds of Hala Strana to the dreamy, psychedelic expanses of his Ulaan series (Khol, Markhor, and now Passerine) and Thuja,  Smith's work is deeply rooted in a mix of various folk styles as well as the freedom and esoterica of experimental music, utilizing deep drones, field recordings, and treated electronics, resulting in a fingerprint-unique and easily recognizable personal style, to which he has lent countless projects. I really can't envision myself as the same musician and music enthusiast without Steven R. Smith's distant guiding hand, and I am eternally grateful for his presence.

The latest installation of his long-running Ulaan series is Ulaan Passerine. Though recognizable likenesses to its sister projects Ulaan Khol's "maximalist" psychedelic rock and Ulaan Markhor's distant, meditative folk stasis can be made, Ulaan Passerine manifests itself as an entirely new entity, almost a culmination and melding of Smith's entire body of work. A collection of four long-form compositions spanning over two c35 cassettes, amounting to around sixty-seven minutes in length, Ulaan Passerine's simultaneous attentiveness to pure atmosphere and memorable melodic inclusion, aspects of Smith's discography which were normally separate areas of concentration, manifesting themselves differently in each project, truly sets this new project apart from the seemingly endless list of Smith projects. Echoes of Hala Strana's pastoral, Eastern European-inspired folk make their way into the fold by way of mournful, almost Romani bowed string work and multi-modal melodies, which, when set against the Thuja-inspired multi-instrumental improvisation, results in a beautiful European East-meets-West fusion, a concept which has largely gone ignored in these sorts of circles. Beautiful sections of likely improvised guitar ragas only add to the deep, meditative setting Smith has set for this new project.

What is most special and impressive about Ulaan Passerine, aside from the fact that it is another Steven R. Smith project (again, I'm a fanboy), is that this is the first time I've seen Smith fully focus all his creative power on one project. Though it was awesome to fully inundate myself with new project among new project, basking in Smith's endless creativity one piece at a time, Ulaan Passerine's inclusion of every impressive aspect of Smith's discography, be it the memorable folk musings, the lulling comfort of a nice, warm drone, or the respected and tasteful bravery of truly adventurous experimenting, shows Smith taking his artistry to that fabled "next step." This is what I've been waiting for Smith to do all along, and I was so complacent with the satiety which comes with hours upon hours of material that I had no idea this is what I had always wanted. Fans of Smith's body of work will know not to miss this, but even the most passing fan of instrumental, psychedelic folk music will find great enjoyment in Ulaan Passerine. A beautiful and fitting companion to hazy Summer afternoons, late night bonfires, and the sound of rain.

This beautiful double-cassette will be available early this week from the always impressive Brave Mysteries, who are also celebrating the release of new material by Xenis Emputae Travelling Band, M.B., Art ABSCONs, Psichiatria Primo Piano, and Litüus. In the meantime, enjoy this beautiful video accompaniment made by label curator N. Ritter.