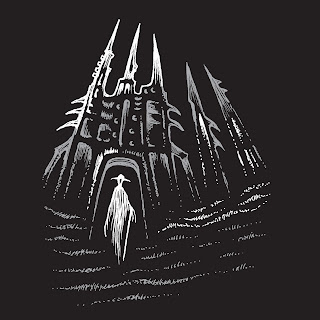 The metal world would be a much different place without the guidance of Michel "Away" Langevin. Whether you are a die hard Voivod fan or not, it is hard to deny this one man's importance, be it with his musical prowess, ingenuity, and visual artistic talents (Away has designed countless logos and album covers!). Of course, we Voivod fans are much more used to Away's more metallic side: a loud, progressive pummeling which is undeniably his own, so many seasoned Away fanatics might find themselves on the more confused end of the spectrum after a full listen of Langevin's newest solo effort, the contemplative and abstract Cities.

Operating in the "musique concrète" sphere, Cities is a collection of field recording collages recorded over the past three years in and around Montreal, as well as around the world while touring with Voivod. These are the sounds of places: people, animals, nature, music. The hustle and bustle of city life slowly decays into a found recording of a solo bandoneon arrangement of Leonard Cohen's "Hallelujah." People dancing and cheering, a parade, commerce - it seems as if Away has perfectly captured the essence of these locales, highlighting the contrast of modernity and human strife against the consistent underlying elements of ancient culture preservation, be it conscious or a mere vestige. This is Away's celebration of life as an observer, travelling the world. Of course, this isn't entirely a serious affair, with a few tongue in cheek samples of crowds chanting "VOIVOD! VOIVOD!" closing out "Europe 2012." A truly unique and inspiring work from one of the music world's most creative souls.

We have removed the album from our soundcloud page. Enjoy the stream via the official Utech Records Bandcamp page.

"Utech Records is pleased to announce the release of the first solo album by Away (Michel Langevin) from Voivod. The album, Cities, is a journey into the life and thought process of an itinerant musician. Recorded in and around Montreal and on the road with Voivod, Cities is an experience in travel via sound, capturing both the geography and the music of the locations visited. The album is a rapid journey across the globe, via a first-ear account from an artist like no other.

Cities will be available July 27, 2013 with exclusive art from Away.
Utech Records at utechrecords.com
Away at irongang.com

I’ve always been fascinated by field recordings, tape collage and musique concrète.
I was introduced to it by Piggy as a youngster. –Away

Strong field recordings capture more than just the sound of an area, they capture a mood and spirit of the place and people. On Cities, local color and nature recordings clash with riots and discord, capturing the full human experience across the world. Literal and metaphorical “found music” appears: the booming stereo of a passing car or distant church bells, as does the rhythmic engine hum of a bus or the chirping of birds. This
tour is a fast paced one, rapidly weaving through the geographic locations building a diverse, yet consistently engaging experience. The audio journey captured here perfectly reinforces the fact that, regardless of one’s location, the presence of music is never far, nor should it be." -Keith Utech

Yes, you could be lucky enough to win a copy of the beautiful, contemplative Cities.

Brush up on your Voivod trivia:

What were the two sides of Voivod's War and Pain LP titled, respectively?

E-mail your answer to theinarguable@gmail.com. The first three to answer correctly will receive their very own SIGNED copy of Cities, graciously donated by Keith Utech of Utech Records!

ALL CONTEST COPIES HAVE BEEN SPOKEN FOR. CONGRATULATIONS TO OUR WINNERS. ORDER A COPY FROM UTECH RECORDS ON JULY 27TH.

Posted by The Inarguable at 7:07 PM