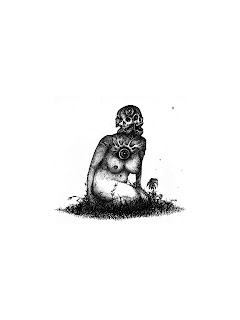 Canadian multi-instrumentalist Neddal Ayad is his own microcosm. Over the course of his music career, Ayad has gracefully stumbled through the worlds of sleazy blues, discordant noise rock, beautiful psychedelic folk, and deep, thoughtful drone. Having followed his career from his early days on Timothy "timeMOTHeye" Renner's Hand/Eye label, Ayad's creativity has been a consistent source of pleasure and pain (in a good way).

Track two, "Tropic of Cancer/Tropic of Capricorn" is its own monster. A lengthy exercise in sound maximizing, this massive wall of pulsing drones and feedback loops slowly shifts between scratching noise and skyward guitar. Joined by his The Floating World bandmate Amanda Votta, who contributes flute midst the galactic soundscape, we can still hear Ayad's sort of folk mentality pushing through, but only as a subtext. Don't get me wrong, this is still a full-on bout of droning psychedelia, but it is unmistakable that this came from a folk musician. A beautiful, flowing, LOUD piece of music.

"Reverb Worship is delighted to announce the release of Great Attractor. This is a superb solo project from Neddal Ayad who also graced the Floating World album I did a while ago. In fact, all three musicians (Amanda Votta and Grey Malkin from The Hare And The Moon) from that album all appear on this recording too in addition to the voice of lithuanian singer Daina Dieva. What we have here is a album which comes across like some galactic space transmission. It begins with "Black Star" which buzzes, hums and sizzles with distorted effects and feedback which dies down to near silence from which we get a mournful vocal amidst angular strummed guitar and keyboards. The second and final track "Tropic Of Cancer/Tropic Of Capricorn" is one of those pieces of music that seems to evolve and reveal more and more each time you listen to it. It has a strange rythmic breathing pattern (or is it a treated drum loop?) with morphing and skyscraping guitar moves and synth patterns which gradually build and develop into some kind of out there Popul Vuhesque film soundtrack.The album has been mastered beautifully by Amanda Votta. Its cover artwork was done by Prins Preben. Printed on 210 gsm white artcard. This cd is available now in a limited edition of 50 copies." -Roger Linney/Reverb Worship