It's probably abundantly clear at this point that Utech is one of my favorite labels. Keith constantly puts out a variety of quality ambient, noise, and free jazz records. Lammergyer is the destructive new record from Burning Tree, a duo of Tape Rape veterans drummer Dag Erik Knedal Andersen and saxophonist Dag Stiberg, the former known for a number of collaborations with various members of the Scandinavian free improv underground and the latter known for his particularly abrasive saxophone sounds and frequent use of distortion and the like. Stiberg's approach in the past has most often amounted to harsh noise created with saxophone as a sound source--and far more artistically than most who attempt that approach. 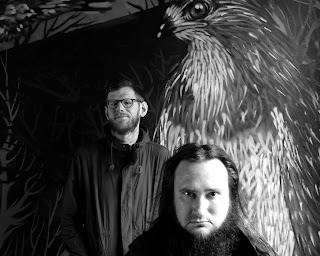 Andersen's Tape Rape background (the um, evocatively named Cunt Rash duo with guitarist Daniel Meyer Grønvold of the Norwegian Noise Orchestra) also hints at the work he does in Burning Tree. Anderson's drums on Lammergyer are based in the violence and chaos of noise's meetings between the metal and free jazz scenes. Whereas a free jazz drummer (even Andersen himself in other contexts) often unleashes a sort of syncopated chaos, the practitioners who come from a metal/noise background (often one and the same) tend to work around a complex "grid" with sounds directly on the lines.

Stiberg, meanwhile, working completely without effects for the Burning Tree project, unleashes sounds surprisingly reminiscent of the bursts of feedback and beat-heavy wave interactions noise folks make with pedal loops and contact microphones. His playing is relentlessly harsh, with some impressively destructive multiphonics and more wild delving into altissimo than one hears even in most of the more pain-fueled free jazz records. 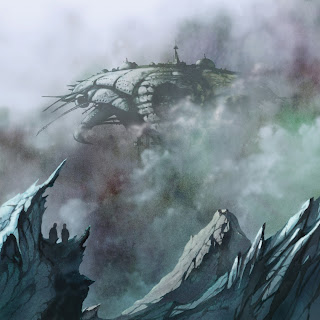 As Utech says, Dag & Dag follow a long duo tradition on this album of an A side of shorter, "digestible" cuts and a B side of one extended improvisation. The B side, "No Return," is where Burning Tree's sound really shines: they integrate all of the elements they displayed on the A side into a performance long and powerful enough to satisfy. It's a distinctly new take on the sax/drums duo concept despite being strongly rooted in the feelings and sounds of sheer wrath and energetic chaos that draw many (myself included) to free improvisation in the first place.

This is a perfect gateway record for noise fans. Do it.

Posted by The Inarguable at 6:07 PM