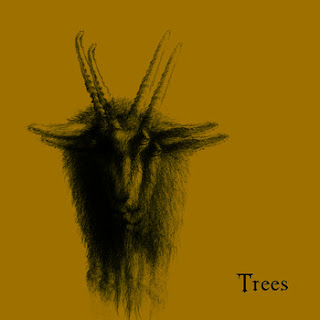 The new Trees album has a goat on the cover, which in my book, is an instant win.  A vibrating goat, to boot.  And I must say, Sickness In is one of those pieces of music that needs to be played at a floor rattling volume to be properly experienced.  No, it doesn't make the music "better," but when the buildup finally breaks it's comparable to the release of a good orgasm.

Trees first hit my radar earlier this year with the discovery of their two previous albums, Light's Bane and Freed of This Flesh.  While their debut brings the heavy doom you crave, Freed of This Flesh showcases the band's development of more eerie buildups and use of textural feedback, which continues onto Sickness In more grandly than before.

Introduced with finger picked guitar and crescendo feedback, Cover Your Mouth doesn't mess around with bringing the drone, but when the intro finally succumbs to the awaited ear splitting madness it's much heavier than anticipated.  This is slower than previous Trees offerings and demands a fitter physique to withstand the continuous aural and filthy feedback.

Perish takes a different tact opens with throat singing, punchy bass, and beloved feedback.  This is one track that will grab your ribcage and pulverize your liver in a total aural domination, and while it is still clearly Trees, the glimpses where their path may be heading.

Sickness In has decimated a lot of the heavier albums released this year, but I almost wish Perish had been first in the track listing.  As it is, this song is an almost-hidden gem in the Manhattan sewer experience Trees create on their latest release.